You are here: Home1 / fired 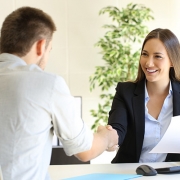 Getting fired from a job is never fun. Whether it’s simply due to the fact that your position/department was eliminated, or maybe you had quite the disagreement with your boss, either way it’s time to move on and start job hunting.

Regardless of the reasoning behind your separation from your previous employer, there’s no going around the fact that you were asked to no longer work there and you didn’t have a say in the matter. This doesn’t mean that your career is finished, simply that it’s time for another chapter. In order to begin writing this new chapter, you’re going to need to interview, and the reasoning for leaving your previous job is most likely going to come up.

So how do you talk about something with such an aggressive connotation in a matter that’s professional, and show that it was merely a bump in the road, not the end of the trip?

It’s all about the delivery when it comes to discussing termination from previous employment in an interview. You should be honest while also keeping it simple and commendable.

“You don’t want to make the separation a liability that a hiring manager will be taking on,” said Roy Cohen, a career coach, in an interview with CNN.

Cohen also claims the first step to a successful interview post-termination, is acceptance. Much like the grieving process after a break up, this first step makes you reflect on why things ended how they did, understand the areas of personal improvement you need to make, accept them, and apply them. Acceptance of one’s own flaws can always be hard to come to terms with, as it involves admitting what we did was wrong, however, if you allow yourself to accept, understand, and grow from these wrongs, it’ll benefit you in your next path.

Once you come to terms with the reasoning, you can better prepare yourself for the interview. You should anticipate that the termination will come up. Sometimes, you’ll get lucky and they won’t ask, but more times than not it will be brought up.

Maintain your professionalism and don’t look like you’re uncomfortable. As mentioned previously, it’s all about the delivery. Keeping it short and simple is the best way to take a certain level of responsibility while also showing that you’re a different and more developed individual because of the experience and, if anything, it made you a harder worker.

See how simple and clean that last sentence was? That’s what you’re going for. The language wasn’t complex, and the overall statement remained positive. Even if there are negative connotations and reasoning surrounding the termination, you can still remain confident and keep the conversation moving, don’t allow it to dwell.

Some tips from Cohen on how to better accomplish this type of discussion in the interview process includes avoiding language that’s heavy, such as “termination” or “fired”.  Instead, he suggests using terms like “separated” “an involuntary reduction in workforce,” “my position was eliminated.” All of these mean the same exact thing, but allow for a much smoother delivery and show your potential future boss that even in the worst of situations you maintain your poise and don’t point fingers.

Talking about former employers should always be avoided unless it’s in a positive matter. Don’t blame or talk poorly about past bosses, that just shows potential employers you don’t accept responsibility and have an issue with maintaining healthy relationships with authority. Employers are looking for employees that will contribute positively to the entire work environment, whatever that may be.

“Explain what you learned from the experience and then get back on topic and talk about the value you could offer based on your competencies, what was in the job posting and what makes you a great candidate. Give some measurable accomplishments” said Wanda Kiser, president and CEO of Elite Resume Writing Services. (CNN)

Kiser is touching on an important note on how to keep the interview moving forward. You discuss the separation as a learning experience. Maybe the position wasn’t the right fit for you and because of that you were able to better understand what kind of job you want, and where your skills would be useful. Then mention you’ve applied that to your job hunt, by only interviewing with companies/positions you feel passionate about. This will show employers you have you taken a certain level of responsibility, were able to learn something, and feel passionately about this potential position.

While you may not have had all the tools that your previous employer was looking for, that separation allowed you to better understand the tools/skills you DO have. Don’t be afraid to talk highly of yourself and the skills you have. Just because one door slammed in your face, doesn’t mean you forgot how to open another one.