Veganism seems to be everywhere in 2019, more people are converting to a vegan diet for many reasons including wanting a better diet as well as helping the environment. But do you know where the friendliest cities for vegans are in the world?

A new list has been released and America has managed to secure three of the top ten cities, missing out on the top spot to London in the United Kingdom.

As the largest vegan and vegetarian restaurant guide in the world, with reviews on vegan options in more than 180 countries, HappyCow are definitely the people who would know!

In the last ten years since the website was launched they have seen the number of completely vegan restaurants listed on their site increase from 625 to an amazing 8100, and that does not include the amount of vegan-friendly or vegetarian restaurants that are on offer.

So which American cities have made their top ten?

Their vegan and vegetarian restaurants are an important factor of Portland’s society and their city has a huge selection of amazing vegan options, including the popular Ichiza Kitchen and Teahouse who specializes in shojin ryori-style meals.

If you are looking for a more family-friendly feel for your dining experience the Vertical Diner and Gold Room have also been recommended in the list which also covers burgers – Next Level Burger – coffee shops – Oracle Coffee Company – and donuts – Doe Donut.

There are also many food carts dedicated to vegan foods which is another factor that Portland is famous for and the vegan strip mall houses a vegan bake shop, grocery store, vegan tattoo shop and a massage therapy studio as well as many amazing vegan restaurants, cafes and coffee shops. If you prefer to go out and have a few drinks head towards vegan bars Maxwell or Capitol who also provide vegan cocktails alongside their food.

If you are looking for a healthier diet there are many options in the City of Angels. Famous for its large choice of international vegan restaurants – there are 19 establishments that specialize in vegan Thai food, two Ethiopian vegan restaurants as well as several Japanese, Vietnamese and Cuban restaurants. There is also a vegan cheese restaurant or you may prefer Italian vegan food, vegan burgers or many other vegan options.

You can also head to Little Pine, a vegan bistro owned by musician Moby, where they serve not only serve a fusion of Italian and Mediterranean dishes, but they also donate 100% of their profits to different animal causes. Celebrity Chef Tal Ronen also has a successful vegan Mediterranean while Matthew Kenney has recently refurbished the 150 year old baker bakery Ladurée’s Beverly Hills branch.

Unsurprisingly, New York City has come in as the second friendliest vegan city in the world, thanks to its immense choice of diverse cuisines. Often considered to be the international food capital of the world, New York has seen a fantastic growth in their vegan industry with 111 vegan restaurants now available in a five mile area within the city. As well as some amazing restaurants, New York City has a wide selection of food carts with many more opening that are vegan specific.

Whether you head to the Vegan Food Court which is home to many great establishments including Marty’s V Burger, V Spot and Jam Cakery (because we all need dessert however healthy we try to eat!). Or why not head to a takeaway such as V-Life?

As with all the cities on the list New York offers many high-end vegan restaurants including the Franchia Vegan Café.

Vegan restaurants are seeing a huge surge in popularity and it is clear that 2020 will continue the trend so we expect to see the list for the top vegan friendly cities to change. 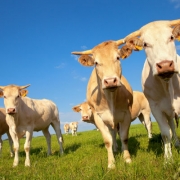 The world’s meat industries have all been looking for more sustainable ways to distribute beef and other meats alike. Now, Aleph Farms, and Israeli food company, has successfully grown meat at the International Space Station. Yes, you read that correctly, food engineers have figured out a way to use cow cells and develop them into full beef steaks. The general goal of Aleph farms was to find the most sustainable, eco-friendly, and slaughter free meat development option to greater benefit meat lovers and the planet and now they may have found a way to make that dream a reality and revolutionize the entire meat industry.

According to CNN, the process explanation is quite simple; the engineers took cow cells and supplied them with tons of nutrients and placed them in an environment that was most similar to the inside of a cow (space). As the cells absorb the nutrients, they grow and develop muscle tissue which eventually grows into full steaks.

According to the official press release from Aleph farms, “a small-scale muscle tissue in a 3D bio-printer was able to develop by 3D Bio-printing Solutions placed under micro-gravity conditions. This cutting-edge research in some of the most extreme environments imaginable, serves as an essential growth indicator of sustainable food production methods that don’t exacerbate land waste, water waste, and pollution.”

The new means of meat production could potentially work as a constant food source for astronauts on space missions, as well as become extremely beneficial to our planet’s growing population and  food demands. The meat industry is one of the top sources of greenhouse gas emissions into our environment, the beef industry specifically making up 41% of all livestock gas emissions, according to CNN. In total, the meat industry is responsible for 14.5% of total emissions in the world, which is even higher than the “direct emissions from the transportation sector of the planet.”

Cows in general are treated just as meat producing machines, so the process of creating meat out of thin air, not literally, is not only more environmentally conscious, but way more humane. The animals also take a lot of food and water in order to properly grow and develop to be their beefiest, so by reducing the amount of cows needed to sustain the meat industry, transportation for food products, factory development of food and water resources will all see a decrease, which would be extremely beneficial for the planet.

“In space, we don’t have 10,000 or 15,000 liters (3962.58 gallons) of water available to produce one kilogram (2.205 pounds) of beef. This joint experiment marks a significant first step toward achieving our vision to ensure food security for generations to come, while preserving our natural resources” said CEO Didier Toubia in the Monday press release.

According to CNN Health, the global population is expected to hit 10 billion by 2050, which would lead to a 70% increase in demand for meat and dairy products. A hard pill to swallow considering Americans and Europeans need to reduce their meat and dairy consumption by 40% in order to sustain that projected growing population. It’s for this reason that Aleph Farms and its many competitors are racing to find the easiest way to create clean, sustainable meat options. This major breakthrough from Aleph is huge for the entire industry, and should help lead other companies on the right track. In addition, the food industry is attempting to make tons of “impossible meat” options, plant based proteins that taste exactly like beef or any other meat. One way or another, food engineers and scientists alike are on the right track to developing a more sustainable world where meat can literally be grown in space.