You are here: Home1 / medical study 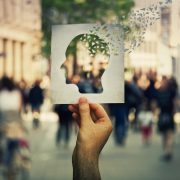 In a new study performed in the UK, scientists measured how 12 major lifestyle changes could help prevent dementia symptoms and delay its development within patients. Things like excessive drinking, exposure to air pollution, and head injuries all increase the risk of dementia, however, if these factors, among the eight others, are addressed early on, it could delay or even prevent dementia symptoms from appearing by nearly 40%.

50 million people suffer from dementia worldwide. England alone is projected to have 1.2 million cases by 2040, which has acted as an extreme motivation for scientists and doctors looking into ways to treat dementia and slow down its detrimental effects. Professor Gill Livingston was a co-author of the study who claims that while some things like genetics can’t be avoided in terms of potential risk for dementia, lifestyle changes can have an extreme impact on one’s risk.

“Dementia is potentially preventable – you can do things to reduce your risk of dementia, whatever stage of life you’re at.”

Even individuals with a high genetic risk of contracting the illness can reduce that risk by implementing these changes into their own lives. The specific report that was recently published builds off a previous study from the Lancet Commission on dementia prevention which addressed nine lifestyle changes that were shown to reduce the risk of dementia by a third. Those changes were a part of this new study as well and included things like midlife hearing loss, depression, a lack of early-childhood education, and smoking.

While many of the factors can be taken on in one’s personal life, Livingston believes that it’s mainly up to government officials to implement new systemic changes that can reduce these risks. The report itself includes nine recommendations for the UK government specifically to tackle including improving air quality.

Livingston also stated that in the past, every decade within the past 30 years has shown a consecutive 15% reduction in dementia risk in North America and Europe likely due to citizens implementing personal lifestyle changes such as quitting smoking. Smoking is thought to be one of the main reasons behind this reduction, as anti-smoking campaigns have grown immensely especially within the last decade.

Fiona Matthews is a professor of epidemiology, and while she wasn’t involved in the study, she’s studied dementia and the risk-factors for many years. Matthews agrees with Livingston’s point that while there is personal responsibility to make these changes if you’re at risk, the government needs to be doing more to help its citizens do that.

“Tackling lifestyle risk factors, personally and as a society, remain important, inequalities in population health, as highlighted by Covid-19, should be targeted. The crucial component is the absence of treatments that delay or postpone dementia.”

The impact of these lifestyle interventions will be greatest among lower to middle class households, due to the fact that they have no control over the societal/world elements that increase the risk of dementia.