You are here: Home1 / mediterranean 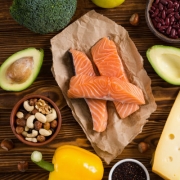 The field of nutrition, it seems, is constantly evolving as new studies refute the findings of previous ones and scientists learn more about how the human body processes food. This has led to the emergence of so-called “fad diets,” which prescribe unconventional limitations on eating and promise to help people lose weight and feel better.

One such diet which has exploded in popularity is the ketogenic diet, which emphasizes eliminating the intake of nearly all carbohydrates to put the body into ketosis, which is a different way of processing food. But some nutritionists argue that it’s unhealthy to put the body into this state for an extended period of time, even though ketosis helps with weight loss and can have other positive effects. As research into this form of dieting continues, nutritionists are learning more about how the body reacts to a carbohydrate-free diet and the various health implications of putting your body into ketosis.

Ketosis is a state brought about by the elimination of carbohydrates from one’s diet, and is characterized by the presence of molecules called ketones in a person’s bloodstream. Without carbohydrates, the body is forced to instead rely on burning fat and protein for energy, leading in many cases to weight loss. Many people believe that ketosis lowers one’s risk of developing heart disease and diabetes, and people who are on the ketogenic diet report feeling more energized and motivated.

The ketogenic diet has been shown to offer advantages not present in many other popular diets, as obese people who started the ketogenic diet lost weight rapidly, with few side effects, and kept off the weight so long as they continued the diet. As such, the diet can be particularly useful for people with obesity, as the rapid onset of weight loss it causes, in addition to the ease of incorporating the keto diet into one’s life, can encourage dieters to stick to their weight-loss plan. That being said, the diet is very strict, as the body can be rapidly taken out of ketosis by the introduction of carbohydrates, leading to negative health consequences both in the form of weight gain and fatigue or other conditions.

The keto diet, however, has more than its fair share of critics. Many argue that while the ketogenic diet can be useful to treat obesity or in the short term, it can actually damage the body in the long term. Lisa Cimperman, a clinical dietitian at University Hospitals Case Medical Center in Cleveland, Ohio, argues that the keto diet causes people to lose muscle and experience fatigue, and actually puts the body into a starvation mode, making it even more difficult to lose weight as time goes on. While not every dietician believes that the ketogenic diet leads to muscle loss, most agree that anyone who is interested in building muscle should not use the keto diet, as ketosis is certainly not optimal for strength training.

Instead of so-called “fad diets” like the keto diet which offer impressive results in the short term but have questionable viability in the long term, most nutritionists advise their patients to consider dieting more as a set of lifestyle choices than as a regimented, temporary program. The most successful diets are the ones that people stick to for extended periods of time, as a lifetime of healthy eating provides the most positive impact. As such, food shouldn’t be thought of in terms of how it should be limited, but rather people should look forward to their meals, as this mindset is better for long-term success. Adopting a mediterranean diet, which emphasizes fruits, vegetables, fish, poultry, and eggs, is widely considered to be a safer and more effective option in the long term. Additionally, conversation about different forms of dieting often excludes discussion about exercise, which is an essential component of a healthy lifestyle, and should be considered in conjunction with choices about what you eat for best results. As such, while the ketogenic diet is tempting for its quick results, people who are serious about living a more healthy life are probably better off avoiding it.