You are here: Home1 / member states 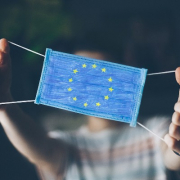 Leaders of the 27 member states that make up the European Union reached a final agreement this week that would pass a $2 trillion relief package “designed to rebuild the bloc’s faltering economies” as a direct result of the Covid-19 pandemic.

The package itself is made up of the multi-annual Financial Framework which accounts for $1.3 trillion to be paid to every member state and distributed across the bloc over a seven-year period. The rest of the $2 trillion comes from an additional $858 billion Covid recovery fund, which will go towards every financial market in Europe as well as take the form of grants and loans to certain member states.

The European Union (EU) initially reached this agreement deal back in July, however, member states have since struggled to reach a unanimous agreement on how the funds will be distributed. Disparities among the member states first appeared after the EU demanded the funds be withheld from states that were deemed in violation of the rule of law.

Poland and Hungary immediately vetoed the agreement after that demand was met due to the fact that both countries are under investigation for violating the rule of law; specifically the suppression of political opposition and undermining the independence of judges.

Poland and Hungary, however, reached a compromise deal at a recent meeting in Brussels which stated that if enough member states believe that the two states aren’t meeting the EU’s agreed rules and standards, they can then vote to determine what funding should be distributed there. Vera Jourova, the vice president of the European Commission, recently released a statement in which she said she was “satisfied that the legal text of the Regulation on Rule of Law conditionality remains untouched and that there is qualified majority voting in the decision of the Council.”

“Some Member States might want to seek full legal certainty on this important matter before the European Court of Justice. This is their right. I expect the proceeding to go fast. In my view, we are talking about months rather than years.” Jourova isn’t sure if these proceedings will satisfy all individuals on both sides, however, all parties can agree that there isn’t time to argue over political ideologies when the world is enduring one of the worst health and economic crisis’ in history.

Poland’s Prime Minister, Mateusz Morawiecki, has recently released a statement as well in which he claimed that he intends to take the EU to the Court of Justice eventually. Jakub Jaraczewski, legal officer at Democracy Reporting International, spoke with the media recently about this major contention in Europe.

For European citizens, this agreement will act as a huge relief in terms of the struggles they’ve faced from the Covid-19 pandemic. The money will help member states build back their economies, and thus, return to a greater sense of normalcy.