You are here: Home1 / meteors 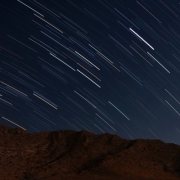 Tonight, Monday May 4th, stargazers around the world can bear witness to an immaculate meteor shower that will lead into a supermoon  this week. The shower is referred to as “The Eta Aquarids” and it happens every year in the beginning of May. It reaches its climax tonight and in the pre-dawn hours of Tuesday – May 5th- but you should still be able to see meteors throughout the whole week.

“This shower happens to be one of if not the best in the Southern Hemisphere. It is a moderate shower for the Northern Hemisphere,” AccuWeather Astronomy Blogger Dave Samuhel said.

Samuhel reports that if you’re living in the southern hemisphere of the planet, south of the equator, you could see as many as 40 shooting stars every hour when the shower is at its peak tonight. The American Meteor Society (AMS) is claiming that the meteors will be most visible in Australia, New Zealand, Africa, and South America, however, it will still be viewable in the northern hemisphere.

In the northern hemisphere, every individual living above the equator can expect to see around 10-30 shooting stars every hour tonight. Normally, this annual May meteor shower peaks after one night, however, this year the shooting stars will be peaking for two – tonight and tomorrow – which just happen to be the last two nights before May’s supermoon; this meteor shower always occurs in May in line with the full moon.

Since this year the shower will be occurring during a supermoon, as opposed to a full moon, it may be difficult to see some of the meteors that are further away due to the brighter nature of a supermoon. However, you should still be able to see a decent amount of shooting stars.

Like with any astrological event, depending on where you live, weather and cloud coverage could be a major factor when it comes to meteor visibility. In the US specifically, it’s looking like those living on the West Coast and the South will have the most optimal and clear skies for viewing the shower tonight; based off of data from previous years relating to this specific shower, and predicted weather conditions for the week.

States in the north/that are bordering Canada should also have relatively clear skies when compared to the middle of the country or East Coast for tonight, however, as previously stated, everyone should still be able to make a wish on at least one shooting star tonight as long as the skies remain cloud-free. Unfortunately for certain areas in the Midwest and Pacific Northwest, tonight’s forecast calls for heavy rain and thunderstorms, so be sure to check your local listings if you’re unsure what your town’s weather will look like for the next few days.

The meteor shower peaks before the supermoon itself, but remains active for a few days after its peak as well. So if it’s raining in your part of the world tonight, you still have everyday this week to possibly witness part of the shower. After Friday, however, it’s much less likely that any meteors will be in the sky.

You don’t need a telescope to view the meteors either, just some patience and a good view of the night sky. Scientists recommend avoiding staring at the moon and look more closely at the darker parts of the sky. The moon is like the sun in the sense that it’s so bright that when you look at it for too long, it becomes pretty much impossible to see anything else in the sky. Scientists predict after midnight will be when the most meteors are in the sky, and the shower will continue to peak until dawn on Tuesday morning.

If you miss this meteor shower, have no fear, another one of equal beauty will be occurring in late July of this year, according to the AMS.