You are here: Home1 / ongoing 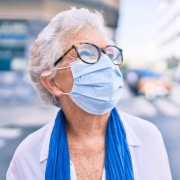 A recent study linked age and number of Covid-19 symptoms in a positive individual to longer-lasting health problems brought on by the virus. What they found specifically is that women aged 50-60 are at the greatest risk of developing “long Covid,” which is when positive Covid patients experience ongoing symptoms for weeks, or months, after they’ve already beat the virus and are considered to be negative.

Dr Claire Steves and Professor Tim Spector at King’s College London led the study which analyzed data from 4,182 Covid Symptom Study App users who had been consistently logging their health status after testing positive for the virus.

In general, based on the App data, women were twice as likely to suffer from Covid-19 symptoms that lasted longer than a month when compared to men in the same age bracket, however, after the age of 60 everyone’s risk level is relatively the same; under the assumption that they don’t have any other underlying health conditions.

Increased age was a general association that came along with the heightened risk levels for long Covid. 22% of people aged over 70 in the study reported suffering from symptoms for four or more weeks after their initial diagnosis. For comparison only 10% of individuals aged between 18 and 30-years-old reported the same experience.

Gender differences only appeared for individuals aged between 50 and 60-years-old, where the data suggested a women’s risk was nearly double that of a man in the same age range. Professor Spector claims these results aren’t entirely surprising, as the same trend exists for autoimmune diseases in general in relation to how they impact men versus women of that age.

“Things like rheumatoid arthritis and lupus are two to three times more common in women until just before menopause, and then it becomes more similar. My guess is that gender differences in the way the immune system responds to coronavirus may account for this difference in risk.”

The study has also not been peer reviewed yet but it is available for viewing in preprint. The results also showed that individuals who experience five or more Covid-19 symptoms within their first week of developing the virus are at a heightened risk for experiencing long Covid symptoms as well.

“There’s certainly a group of long Covid sufferers that have this multi-system immune–like disease, where they get gastrointestinal problems, skin rashes, nerve problems and brain fog – so the whole body is involved rather than just one bit,” claimed Spector, who went on to explain that the immune system is likely working differently in individuals who experience these multiple body system symptoms. Those individual’s immune systems have to work a lot harder and for a lot longer to get the entire body back on track when compared to patients who contract the virus but only experience minimal to no symptoms.

The study also suggested that individuals who have preexisting health conditions such as being medically overweight or having asthma and other respiratory diseases could increase ones risk to long Covid.