You are here: Home1 / Qingdao 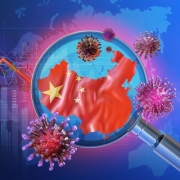 Over a period of five days, authorities in the Chinese city of Qingdao will test all nine million of its residents for Covid-19 after it was discovered that a dozen individuals were positive for the virus in a hospital that was treating coronavirus patients arriving internationally.

While this may seem like a daunting task, back in May China was able to test the entire city of Wuhan, the initial epicenter for Covid-19, for the virus. Wihan is home to over 11 million residents for context. Overall, China has been one of the only countries to get the virus completely under control.

Compared to other parts of the world, China has remained diligent and strict with their health and safety measures ever since the virus first emerged there in March. Qingdao’s Municipal Health Commission posted a statement to Chinese social media site Weibo this past weekend, claiming that six new cases and six new asymptomatic cases had been discovered.

All of the cases were directly linked to the same hospital, which will make it easier for Chinese authorities to trace. While this new cluster of cases may not seem that severe, the country as a whole has a strategy of mass testing in any event of new coronavirus clusters, no matter how minor; a stark difference with how America is handling the virus, which is currently infecting 50,000 Americans every day.

The National Health Commission claimed on Monday that the “whole city will be tested within five days.” Qingdao’s health commission also recently claimed that around 115,000 individuals, including medical staff and newly hospitalized non-Covid patients, have already tested negative for the virus.

Local media outlets reported on residents lining up late Sunday to get tested, which is also likely connected to the Mid-Autumn Festival festivities that millions of China’s residents participated in a week ago. During the holiday festivities an estimated 4.47 million domestic travelers moved across China.

The city of Jinan, which is located in the same province as Qingdao, called upon any resident that may have visited the city since September 23rd to get tested. Daily infection rates in China have dropped drastically, and even after two port workers who handled imported seafood in Qingdao tested positive for the virus, no new cases were reported.

According to the World Health Organization China is currently dealing with 91,305 active cases and the death toll has stood at 4,746. When they had to test all 11 million residents of Wuhan, China they did it by opening hundreds of new temporary testing stations for a 10-day period. Thousands of staffers were hired and mobile teams were sent out to go to individuals homes who may be too old to travel, or are immunocompromised to the point that going outside poses a major risk.

Qingdao is also planning on taking a page out of Wuhan’s book by setting up pool-testing, which essentially tests between five and 10 samples at a time. With this type of testing you don’t know who individually tests positive from the group if you get a positive result, so if that is the case, medical workers will go back and individually test every participant again to find who has the virus.