Tag Archive for: sense of taste

You are here: Home1 / sense of taste 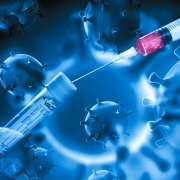 Anosmia is the loss of the sense of smell and ageusia is a diminished sense of taste that usually comes as a result of anosmia. These two ailments have recently become two signs of potential COVID-19 infection based on multiple cases in which those who contracted coronavirus described their symptoms as including a lack of smell and taste.

Doctors from the United Kingdom recently reported that they’ve received multiple calls from international colleagues claiming that they’re forcing any individual who’s experiencing a loss in their sense of smell or taste to self-quarantine themselves, even if they’re not experiencing any other symptoms.

“[We’re] urging health care workers to use personal protective equipment when treating any patients who have lost their senses of smell, and advised against performing nonessential sinus endoscopy procedures on anyone, because the virus replicates in the nose and the throat and an exam can prompt coughs or sneezes that expose the doctor to a high level of virus,” said Professor Claire Hopkins, president of the British Rhinological Society.

Reports from Wuhan, China, where the coronavirus initially emerged, specifically stated that ear, nose, throat, and even eye specialists (otolaryngologist’s) were the most infected healthcare provider demographic in the country, likely due to being exposed to the virus through their work long before we knew the extent of damage COVID-19 would cause.

According to data provided by the American Academy of Otolaryngology (AAO), 30% of 2,000 coronavirus patients in South Korea stated they experienced some level of anosmia as their most intense symptom, these cases were also reported to be the most mild. The AAO states that the evidence now indicates a complete loss or reduction in one’s sense of smell or taste is a significant symptom of COVID-19, and any individual experiencing such should be tested immediately and self-quarantine, as a majority of the patients who experienced these symptoms didn’t report having any other ailments, despite being positive.

China, Italy, and Iran, have all reported a high rate of positive coronavirus results among their otolaryngologist population, many of which resulted in death due to an extensive amount of time in which these individuals were left untreated, which has made protecting healthcare providers a top priority. Doctors have concluded that an individual who seems completely healthy could be unknowingly carrying and spreading the virus because they aren’t experiencing any of the traditional symptoms to cause concern.

“Roughly half of the patients have experienced a smell or taste disorder, and the sensory loss usually presented after the first symptoms of respiratory illness, but could be used to distinguish people who should be tested. The patients regained their ability to smell after a few days or weeks, and the loss occurred regardless of how sick they got or whether they were congested. Using nasal drops or sprays did not help,” said a physician who studied a cluster of coronavirus patients in Germany.

The main priority needs to be testing, and equal distribution of that testing among all citizens. There are still hundreds of thousands of individuals in America alone who do have the traditional symptoms associated with COVID-19, but are still waiting to be granted access to proper testing. Many of these patients have also reported a loss of smell or taste, despite not having any sort of congestion issues.

Staying informed, distanced from the public, and clean are the best things you can do to protect yourself and your loved ones from getting and spreading this virus. If you’re experiencing any sort of symptoms, regardless of how minor, don’t hesitate to call a professional to get your best course of action. It’s important, now more than ever, to be totally diligent and responsible when it comes to our health.