You are here: Home1 / sequence 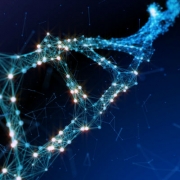 Despite rapid scientific advancements over the past several years, little is known about the lives of prehistoric humans, who left behind no written records and few artifacts. However, scientists were recently able to sequence a prehistoric human genome from DNA left in birch pitch, discovered in Denmark, which was used as chewing gum 5,700 years ago and was preserved in mud. This rare insight into our species’ genetic history gives scientists new information about our distant past, particularly with respect to how human beings have changed genetically over the past few millennia due to evolution. The discovery represents a breakthrough in our understanding of prehistoric human life, as the research presents insights into the diet, lifestyle, and genetic makeup of our distant ancestors.

The results of the research were published by Nature in a paper that provides extensive detail about the methodology used to analyze the birch pitch as well as the implications of this analysis on our understanding of human history. By looking both at the complete human DNA which was found in the pitch as well as DNA from other plants and animals that the prehistoric individual may have eaten, the researchers determined information about the nearly six thousand year old person and extrapolated from this data to speculate about the larger culture she was a part of.

The human DNA revealed that the person, whom scientists named “Lola,” was female and probably had dark skin, dark brown hair, and blue eyes. Given that the birch pitch was found in Europe, the fact that Lola had dark skin is notable, as it suggests that the spread of the trait of light skin pigmentation did not occur until later in history. Additionally, the DNA showed that Lola was lactose-intolerant, supporting the theory that tolerance to lactose evolved later in the history of human evolution after the beginning of dairy farming.

Lola, and by extension people who lived in Denmark at the time, likely lived a hunter-gatherer lifestyle, suggesting that this lifestyle persisted for longer in prehistory than scientists had previously assumed. In addition to providing a complete picture of Lola’s genome, the tree birch sample also gave scientists a snapshot of her “oral microbiome signature,” or the various species of bacteria that lived in her mouth at the time.

One of the species of bacteria they discovered was Streptococcus pneumoniae, suggesting Lola may have been suffering from a respiratory infection at the time. They also found evidence that Lola may have had mononucleosis, commonly known today as “mono.” Additionally, the scientists found DNA from animals and plants that were likely part of Lola’s diet, including hazelnut and mallard, supporting the opinion that Lola and the people living around her primarily found their food by hunting and gathering. While the evidence provides a genetic snapshot of a moment in Lola’s life, other details of her story, including her age and the cause of her death, will likely never be known.