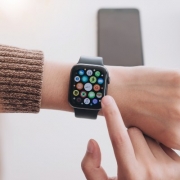 The Apple Watch has officially been on the market for five years now, and while the device itself was originally advertised as an “iPhone for your wrist,” the Apple Watch has truly made a name for itself as one of the best wearable fitness tracking devices out there. When the Watch first launched back in 2015, it had about 3,000 compatible applications available to download. Now, there’s over 20,000 apps, 21 of which are pre-downloaded onto the device itself.

“The watch is really about convenience. You’re not going to spend so much screen time on your watch. So I think the secret of building a good Apple Watch app is to think of it as an accessory in addition to something. Very few people use it as a standalone unless it’s for fitness or health, or some kind of monitoring.” said Ray Wang, principal analyst and founder of Constellation Research.

So what are some of the best applications for the Apple Watch that have been able to withstand the test of time/multiple generations of Watch upgrades?

Noise: This application is available for anyone with an Apple Watch Series 4 or later and allows users to measure the ambient sound in your surrounding environment. This application is especially useful for those with hyper-sensitive hearing, or any other type of hearing impairment. If the decibel level in your environment has risen to a point where your hearing itself may be impaired, the app can notify you.

Cycle Tracking: No not bicycle tracking, menstrual tracking. With this application, individuals who experience menstruation are able to log details about their cycle; including flow information, and what symptoms they normally experience. Using that data the app is able to alert users when it predicts your next cycle to begin, and allows them to track where they’re at every month.

ECG: As previously stated, the Apple Watch has really made a name for itself as one of the best wearable fitness tracking devices on the market currently. If you have a Series 4 or later, there’s an electrical heart rate sensor built into your watch that works in sync with the ECG app. This app works like a traditional heart monitoring app and tracks your heart-rate as you do various activities throughout the day.

Breathe: The breathe app is a reminder to stop for a few moments every day and take a breath. This is an especially great tool to use during this time of constant uncertainty and panic. You can set breath reminders everyday, or just open the app itself when you feel like you need a break. You’ll see a calming animation that encourages you to sync up your breathing with its movements for 5 minutes. During this time, you can also use the app to check your heart rate.

Remote: If you have an Apple TV, you can use your watch as a second remote using the remote application. If you already have an iPhone or iPad, you may be familiar with this application as it’s available for both those devices as well.

Walkie-Talkie: The Walkie-Talkie app is definitely one of the most popular Apple Watch apps that has been around since the very beginning. This app allows you to use your watch like a real walkie-talkie for you and any other individual who also has the app. You simply press and hold the button to speak, and then you can listen to it back before sending it on its way, it’s basically like sending voice messages, but you’ll feel much more like James Bond.

Voice Memos: Speaking of voice messages and memos, this application is perfect for the individual on the go who’s constantly being inspired by the outside world. Instead of taking out your phone and opening up a note to quickly jot down, simply record your memo into your Apple Watch, and it will save the recording across all of your iCloud devices.