You are here: Home1 / shark sightings 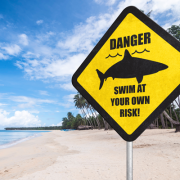 Summer beachgoers have had to be extra cautious this summer as several reports of shark bite injuries and general sightings of ocean predators off the Northeast coast of the US have become prominent.

According to Gavin Naylor, director of the Florida Program for Shark Research at the University of Florida, “globally, shark attacks are at similar levels to previous years, but there are signs that the Northeast coast of the US might be seeing an uptick.”

“We are right on trend for this time of year. I think globally, we usually get between 70 and 80 unprovoked bites by sharks around the world. But that’s a global phenomenon. And it’s distributed in a patchy way.”

“One year we might have two or three bites in Hawaii in rapid succession. Next year, it could be New Caledonia; it could be in Western Australia. And this year, it’s off the coast of Long Island,” Naylor stated.

Last year there were 73 cases of unprovoked shark bites, according to the International Shark Attack database, within the past five years the average amount of unprovoked attacks has remained around 72.

Naylor emphasized that the sharks that swimmers have been encountering this year, especially off the coasts of Long Island, are looking for food, not targeting humans.

“Most have been identified as sand tiger sharks, which, while fearsome looking, aren’t considered aggressive. They have likely been venturing into coastal waters to prey on abundant shoals of bait fish.”

“These bait fish are in schools of hundreds of thousands – or millions, and when they get quite close to shore, the sharks follow them,” Naylor said.

Off of Cape Cod there have been several great white shark sightings this summer, prompting the closure of at least one major beach. During the summer and fall white sharks are known to hunt their preferred prey of seals, which tend to be towards the shore.

Wildlife research performed a study last year which showed great whites spend almost half of their time in the summer/fall season in waters with depths of 15 feet or less.

“Until now we didn’t know just how much time they spent in shallow water close to shore,” said lead author Megan Winton, a research scientist at the Atlantic White Shark Conservancy.

Naylor concluded by offering swimmers advice when it comes to protecting yourself from a potential attack: “Don’t swim or surf on your own, and don’t swim near big shoals of fish or if you spot seals nearby. Don’t wear jewelry in the water that a shark could confuse for the shimmer of fish scales. If you do spot a shark, back out of the water slowly. Don’t panic and splash around.”