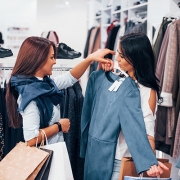 We’ve all had dark moments in our life that require some sort of therapy to help remind us who we are. Besides actually going to therapy, which is always the best thing to do in times of mental distress, there are a ton of ways that people cope with hard times in their life. Whether it be watching your favorite romantic comedy with your best friends and eating an entire pint of ice cream, or heading down to the mall and indulging in some retail therapy, there’s a multitude of ways to help distract ourselves from the trials and tribulations of everyday life, but how effective are these methods of coping actually?

When it comes to retail therapy specifically, there’s no doubt that buying a brand new pair of shoes or a nice expensive denim jacket will definitely make anyone feel a lot more stylish and better in the moment. But how efficient is shopping for pleasure in the long run when it comes to dealing with certain stresses in our lives?

“Purchases made during a retail therapy session are unexpectedly beneficial, which leads to mood boosts with no regret or guilt. Retail Therapy is a strategic effort and process and retailers could learn from their personal findings as well. When done in moderation, retail therapy can be an extremely beneficial tool to help boost your mood,” said Margaret Meloy, the lead author of a recent study on retail therapy.

Obviously, the effectiveness of retail therapy is situational to your specific emotional state, however, there are some general conclusions about it that show it really is beneficial. Studies suggest that using shopping as a means of coping with uncertainties in our lives puts us back in control when we find ourselves in situations where we feel the opposite. You’re the one deciding where you want to shop, how much you want to spend, what you want to get, etc. and therefore are reminding yourself that you are in control of your own life and the path you choose to go down.

Evidence also suggests that shopping can be a great way of mentally preparing yourself when facing any sort of change/new phase in your own life. Before you make a purchase, there’s a certain level of thinking that goes into it. For the sake of argument let’s say we’re talking about buying a brand new pair of pink pants that are a little out of your comfort zone in terms of style. Before you buy them, internally you’re going to think about where you’d wear the pants, what draws you to them, and eventually, should you choose to purchase them, why none of that really matters and that you simply just want the pants.

The simple type of logic that goes into buying new clothing, or anything for that matter, for ourselves can be used for the mental stresses we face in our own lives. Say you have to move cities if you want to keep your job, you’re going to think about where you’re going to be heading, what might draw you there, and eventually, should you choose to make the move, why none of that really matters and that changes in life are good and show that you’re growing as an individual; see the connection?

Additionally, research has suggested that shopping causes the average individual to get excited and releases the hormone responsible for happiness in our brains, dopamine, which is especially helpful when we are facing challenges in life and our dopamine levels are feeling the effects. The activity itself also requires us to move around and interact with others in order to find what we’re looking for, so it builds our social skills and ability to hold casual conversations, while keeping our physical bodies active.

While retail therapy will never have the same effectiveness as actual professional therapy, the facts are there. Shopping helps remind us that we’re in control of our own lives, capable of making decisions, and can do anything we set our minds to, even if that means just buying a new pair of pink pants! 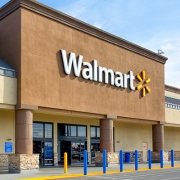 Retailers across the world know that although customers can, and do remain loyal for many years, the younger generation are happy to swap shops for a better deal.

Therefore how stores present themselves to customers has a direct effect on not only how many customers they can get through their doors, but how much they will spend once there.

Every organization will have their own unique take on this and Walmart is no different. Customers heading into Walmart anywhere across the U.S. will see produce as soon as they enter, and this tactic is a major factor in the retailer’s competition against other companies, including as Amazon.

It is important that shops keep their customers engaged and with this in mind Walmart have announced they are updating their produce aisles in all their stores.

In an attempt to stay innovative, America’s largest grocer will be redesigning their produce sections, adding new signage so the customer can see prices clearer as well as making their merchandise bins smaller. This is a clear attempt at the owners wanting to create a more ‘open market feel’ to reflect the habits of modern day shoppers.

And with many consumers opting for a more organic lifestyle Walmart have announced they are creating a new section in the store keeping everything together. This should appeal to customers who are rushing in on the way home and want to grab their items without having to search around the many different departments for a few simple items.

The increase in the number of people ordering groceries online has created an environment where we seem to be constantly trying to move around an employee and their cart so stores will now have wider aisles to accommodate everyone.

Charles Redfield, Executive Vice President of Food at Walmart’s US business acknowledges that online shopping has ‘fundamentally changed the way we operate our food business within the store’ stating that:

‘We’ve always got associates in the produce area. This layout created more space in the department to allow room for customers to shop.”

Nicknamed “Produce 2.0”, the remodel has already kicked off with over 200 stores currently having work carried out and Walmart is working towards a completion date of next summer for most of their 4,700 stores.

Despite the growth in online shopping, 95 percent of shoppers still prefer to head into a shop to purchase their produce, mainly due to our nature to rummaging through the bargain bins and see what other offers are around. And it does not seem to be waning. According to a study by Nielsen sales of produce increased in 2018 by 2.6% and it looks set to continue this trend.

Redfield is hopeful that Walmart’s new look will encourage shoppers to buy their high-quality produce stating ‘fresh is key to the food shopping experience.’

It is not only Walmart who have announced an investment in produce. German rivals Aldi increased their organic and produce sections in the last few years while Kroger have also made their own announcements.

Kroger announced they are investing in hydroponic farms at their stores in Washington State, which supports their new advertisements focusing on their fresh food, with the slogan ‘Fresh for Everyone’ at the top of their priorities.

Walmart has been a staple in the American shoppers’ psyche for the last 31 years since they opened their first store in 1988.

Groceries have become their biggest sellers, creating over $500 billion in revenue, which equates to around 56 percent of the business. Despite competition from other superstores, Walmart continues to be America’s biggest grocer, with Morgan Stanley estimating them to be receiving roughly 20% of the fragmented US grocery industry.

In recent times Walmart has reduced prices to maintain their competition against other stores, including discount rivals, as well as improving the supply chain, making their fruit and vegetables have a longer expiration date on their shelves.

Redfield confirmed that the ‘one thing the customers were telling us is that, you know what, “We didn’t believe in your quality.” We knew we had some work to do there,”

As well as the investments in store, Walmart are also investing in their online grocery shopping, an act that they hope will protect them against Whole Foods, which Amazon bought in 2017.

Customers now have the option to buy-online, pickup-in-store at 3,000 of the company’s stores while 1,400 locations are now able to receive home delivery thanks to a new $98 a year deliver subscription.

This has come on the back of Walmart’s latest quarterly review which showed online sales have increased by 41% meaning Walmart are adapting to the needs of the ever busy American.