Tag Archive for: side effects

You are here: Home1 / side effects 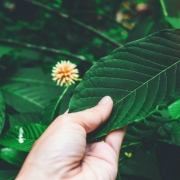 Some use the drug in an attempt to rid themselves of an opioid addiction, while others simply use it to get high. The drug has been used in herbal medicines in Asia for hundreds of years, but little research has been conducted on its effects on the body. Despite the potential danger of using it, the drug is legal throughout most of the United States, as regulators have not yet caught up with its growing popularity. The drug, derived from a tree indigenous to Southeast Asia, is called kratom, and while some swear by its supposed healing properties, others warn that it could carry as-of-yet unknown dangers.

In the United States alone, between ten to fifteen million people use kratom, for a wide variety of reasons. Though it is not itself an opioid, kratom has some opioid-like effects, as it’s often used to provide relief from chronic pain. While the scientific evidence for its effectiveness in treating addiction is scarce, many people who are addicted to opioids turn to kratom in desperation, and some swear by kratom’s effectiveness for this person. Others use the drug in a purely recreational way, as it generates a sense of euphoria, lasting for two to five hours. While the drug is not strictly speaking a hallucinogen, in high doses it can lead to psychosis. It has a number of other serious side effects as well: some users report nausea, vomiting, and constipation, while others experience dangerous effects like decreased rate of breathing, seizures, and addiction. At very high doses, kratom is potentially fatal.

For these reasons, the federal government, as well as many state governments, are pushing for a ban on the drug. While many view this as a necessary step to prevent the rise of another drug-related public health crisis, others warn that banning kratom could prevent people who are struggling with opioid addiction from accessing a potentially effective treatment. Kratom users believe that the drug offers a wide range of beneficial effects, from improving eyesight, to clearing skin, to boosting the immune system. Unfortunately, however, the scientific research that currently exists about the drug is far too sparse to justify any of these claims.

The research that does exist, however, ought to be sufficient to dissuade any reasonable person from using kratom, despite its mild euphoria-inducing effects. When taken with some prescription medicines, kratom causes abnormal brain function, leaving a person unable to communicate and experiencing a severe headache. Kratom has also been found to be harmful to fetuses when used by pregnant women, leading to an infant who is born with withdrawal symptoms as their access to kratom is cut off. And it can be difficult to tell whether kratom has been mixed with other drugs to alter its effects, posing even more and unpredictable dangers to the user. Kratom is even sometimes sold mixed with dirt and mold by careless dealers. Despite these risks, however, kratom has become a trendy drug just like CBD has, and kratom is sold openly in cities like Portland. What’s important to keep in mind, though, is that just because a drug is legal, that doesn’t mean it’s safe.