You are here: Home1 / skunks 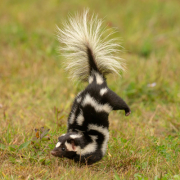 Spotted skunks are smaller than their striped relatives; about the size of a squirrel. They live all throughout North America and are carnivores. When it comes time to scare off a predator, these skunks perform a handstand and kick out their back legs as a form of intimidation.

“When they’re stressed, they bounce up onto their forelimbs and then kick out their hind limbs, puff their tail up, and they actually can walk towards the predator, basically making them look bigger and scarier. These ‘ecologically cryptic’ creatures live in dense environments and remote areas and seem less adaptable to urbanization than their larger, striped counterparts, Ferguson said.

Spotted skunks keep such a low profile that it makes them hard to study. The first spotted skunk was discovered in 1758, and since then there have been 6 potential other skunk species. Ferguson explained how they determined there were seven kinds of spotted skunks after analyzing data and observing them in their natural habitat.

Ferguson and his team went to Mexico six times, and never caught a spotted skunk, but if they did they likely would’ve had a smelly surprise waiting for them.

“We call it the smell of success because it means we’ve actually encountered one, which is the ultimate goal. I was inspired to make ‘wanted’ posters and distribute them across central Texas in feed stores and areas where ranchers and trappers operate. The posters described the need for any spotted skunks that may have been trapped or found as roadkill and showed photos of the creatures,” he explained.

The researchers also analyzed museum collection specimens to give them a greater understanding of their evolution and history.

“I was able to extract DNA from century-old museum samples, and it was really exciting to see who those individuals were related to. It turns out that one of those was a currently unrecognized, endemic species in the Yucatan,” said study author Molly McDonough.

“The study wouldn’t have been possible without the museum specimens we had. The only reason we were able to get sequences from the more recent spotted skunk discoveries were museum specimens that were collected 60 or 70 years ago,” Ferguson said.

Skunks originally appeared in fossil records some 25 million years ago, and during that time they evolved and split into different species due to climate change and the ice age.

“Knowing more about spotted skunks can also help conservation efforts to protect these animals. Skunks have their own role to play within the ecosystem, consuming fruit and defecating seeds that help with the dispersal of plants, as well as preying on crop pests and rodents,” Ferguson said.