You are here: Home1 / small animals 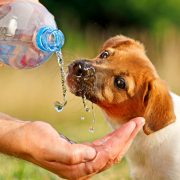 If you’re a small animal owner, it’s important to remember as we transition into warmer seasons in the coming months that your furry friends are at risk of heat stroke, depending on where you live, their setups, and how easy it is for them to cool down. Animals like rabbits, guinea pigs, hamsters, ferrets, chinchillas, and others need to be protected from extremely hot and humid environments.

Researchers have said that there needs to be an increase in public awareness of heatstroke, and the risks that different animals have to experiencing it. Climate change is making it even harder for small animals to remain cool during the summer months.

The most common symptoms that researchers found across every species include abnormal breathing, lethargy, collapsing, and stomach issues like diarrhea. Caged animals like rabbits, guinea pigs, and ferrets are at risk of heatstroke because of their confinement in their cage set ups. Make sure you have the largest and safest set up for your small animals and allow them to get free time every day to stretch.

Dr Anne Carter, a researcher at Nottingham Trent University, said: “There is a misconception that heatstroke in pets only relates to dogs in hot cars and we need to do more to raise awareness of risk factors not only for dogs but in the wider pet population.”

“Owners of small animals such as rabbits, ferrets and guinea pigs may need to review their pet’s housing and take steps to keep their pets cool in the warmer months to reduce the risk of heatstroke.”

If you have a flat-faced rabbit, typically lop-ears have flatter faces, it’s important to know that they are more susceptible to heatstroke.

Emily Hall, a researcher and vet, said: “Heat-related illness can affect all pets and is likely to become more common as global temperatures rise. Our findings highlight the need for better public awareness of heatstroke and the risk to all animals.”

“The fact that brachycephalic [flat-faced] dogs and rabbits were overrepresented in our study suggests that owners of these animals should be particularly vigilant during hot weather.”

The data from the study observed a relatively small number of pet patients, so the researchers made it clear in their findings that the overall figures for heat stroke among small animals, dogs, and cats is likely much higher than any reported numbers.

Lack of awareness from the owner can be the biggest cause of death from heatstroke. In general, when you commit yourself to an animal, no matter how big or small, it’s important to do the proper research and make sure you’re doing everything you can to keep them comfortable and healthy throughout the warmer months.