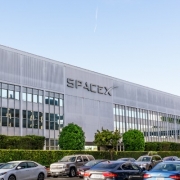 A giant experimental rocket that was built by Elon Musk’s SpaceX company was successfully launched eight miles above the company’s testing facilities in South Texas. The rocket launched and landed as planned before it crashed into the ground resulting in a massive plume of smoke and flames.

No one was on board of the experimental rocket that was over 160-feet tall. According to Musk, the rocket will hopefully be used to haul massive satellites into Earth’s orbit, and will be able to shuttle people between cities at record speeds; which would also eventually lead to the human settlement on the planet Mars.

Musk hopes that this technology can be the first step in establishing a human presence on Mars, and the massive explosion at the end of the test landing wasn’t exactly unexpected. The name of the prototype vehicle is the “SN8,” which Musk tweeted had a one-in-three chance of landing safely back on Earth after its first test-flight.

The SN8 did successfully manage to maneuver to its landing target however, according to Musk, the rocket’s fuel system caused it to make a crash landing. Musk and SpaceX in general are no strangers to embracing the mishaps that occur with their multitude of experimental flying vehicles. When an error occurs, the company quickly moves to create an upgraded version of whatever failed and keeps on experimenting until something successful is established.

SpaceX has previously attempted two previous launches of SN8 this week however both of those attempts were halted moments before the countdown clocks ran out. It hasn’t been made clear why those particular launches were paused while this one actually was able to occur, however, last-minute mission cancellations are not uncommon in general for space exploration.

The company claims that they’re still obviously a long way from building an operational Starship spacecraft that would be able to support human travel to Mars, however, this was an amazing first step in that direction. So far the company has been focusing on what models would be able to perform best under the pressure that occurs when the rocket enters into the varying atmospheres in space.

The next SN8 model that will be tested is the first of its kind to have three engines installed and will have the highest amount of risk for failure as a result. Initially Musk wanted to launch the SN8 into the stratosphere, which would be around 11 miles about the Earth’s surface. The company later decided an 8 mile distance would be a much safer bet as at least they would know that the rocket could make it to the point that is widely considered the “edge of outer space.”

The final starship design will have to have six engines in order to successfully enter Earth’s orbit on its own and launch at the rate that SpaceX is aiming for. The idea of putting human beings on Mars will obviously involve a lot of technological, political, and ethical questioning that will likely be ongoing past our lifetimes, however, this launch goes to show that the possibility is there, now it’s just a matter of time and execution.