You are here: Home1 / snake venom 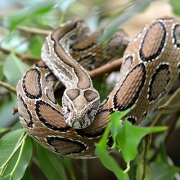 Every 5 minutes, 50 people are bitten by a venomous snake, and every day at least 200 people die from the bite. The main way to treat a snake bite is with antivenom; which is made by milking snake venom by hand and directly injecting it into a horse. The horse’s immune system will respond to the small doses of venom and evoke a response that produces antibodies that fight the poisonous effects of the venom. The horse’s blood is drawn and purified to collect the antibodies, this process can also be done within other large animals as well, however, it’s quite dangerous for all parties involved.

The process of creating antivenom is messy, error prone, and extremely labor intensive, and if you’re not paying attention and doing everything 100% correctly, it can result in serious side effects for the snake, bitten human, the horse, and the individual performing the whole process. Antivenom production has been the same since the Victorian era and, up until now, it was the best way to treat severe snake bites. However, scientists have finally made major strides in producing snake venom in a lab environment using stem cells and genome mapping.

“[We] have created venom-producing glands from the Cape Coral Snake and eight other snake species in the lab, using stem cells. The toxins produced by the miniature 3-D replicas of snake glands are all but identical to the snake’s venom. These are massive developments because it’s bringing 2020 science into a field that’s been neglected,” said Nick Cammack, head of the snakebite team at UK medical research charity Wellcome.

Hans Clevers has been the principal investigator at the Hubrecht Institute for Developmental Biology and Stem Cell Research in the Netherlands in regard to creating a new antivenom, however, Clevers wasn’t even intending on tackling this issue originally. In 2009, Clevers and his team developed a technique to make miniature human organs out of stem cells called organoids. This made medical history at the time, as doctors were given the ability to test the specific effects of certain drugs safely outside of a patient’s body, but still using their specific DNA to know how they would react; these techniques really advanced certain cancer treatments as well.

At the time, Clevers was teaching as well as creating these organoids, and when three of his PhD students asked about the logistics of what else stem cells could recreate, they all began brainstorming about different animal organs to make in a lab setting. Eventually, they all agreed that recreating a snakes venom glands would be the coolest development they could make, and although they all had low standards on their ability to do so, the lack of research, at the time, regarding stem cells and snake venom was enough inspiration to at least try.

“[We] found we were able to take a tiny chunk of snake tissue, containing stem cells, and nurture it in a dish with the same growth factor we used for human organoids to create the venom glands. These snake organoids produced the same toxins as the snake venom. Open them up and you have a lot of venom. As far as we can tell, it’s identical. We’ve compared it directly to the venom from the same species of snake and we find the exact same components,” said Clevers, who posted about these findings in the Journal Cell.

Once developed, Clevers and his team took their stem cell venom and some real venom that was extracted from the same snake that their lab-made venom emulated and compared how human muscle cells reacted to both on a genetic level. They found that the muscle cells had the same exact reaction to both, meaning they successfully created an “artificial” version of the venom that, genetically, is identical to the real thing.

This is a huge development, as previously mentioned, current antivenom practices that involve horses has been the main method of treating snake bites since the Victorian era, so Clevers and all the other teams in Europe currently working on this are advancing science more than they know. Only 60% of the world’s venomous snake populations have successful antivenom treatments in the case of a bite. The goal is to begin developing snake organoids from the 600+ venomous snake species currently living on our planet. If successful, the mass production and distribution of these new treatments could have hundreds of thousands of lives every year.

“The next step is to take all that knowledge and start investigating new antivenoms that take a more molecular approach. The lab now plans to make venom gland organoids from the world’s 50 most venomous animals and we will share this biobank with researchers worldwide. At the moment, we’re able to produce the organoids at a rate of one a week,” Clevers said.