You are here: Home1 / social networks

In an era of widespread political disinformation deployed by bad actors to influence democracies, Facebook has faced criticism for its policy of allowing advertisers to use its platform to spread false messages, particularly about politics. Facebook CEO Mark Zuckerberg has argued that such a policy is necessary to protect free speech, and that he doesn’t see Facebook’s role as one of censoring political messages. Certainly, the question of how to handle the spread of disinformation on social media networks is a tricky one, particularly during a time when the president’s reelection campaign overtly makes false claims in social media ads, most notably on Facebook, to influence the voting public.

Rival social network Twitter has decided to address the problem by banning political ads on Twitter altogether, neatly sidestepping the issue by refusing to participate in it in any capacity. But even in the face of ongoing, intense criticism and action taken on other platforms, Zuckerberg has remained steadfast in his opinion, positioning Facebook as a platform that promotes free speech instead of one that polices the political views of its users. However, amid the intensity of the criticism directed at the social networking giant, Facebook has recently announced it would ban “deepfakes” on the site, an apparent concession to those who are worried about social media’s role in facilitating the spread of false information.

So-called “deepfakes” are the result of new technology, made possible by advances in machine learning using neural networks, that can appear to show evidence of a person saying or doing something that they did not in fact say or do by manipulating video to superimpose an image of one person’s face onto another person’s head with near-perfect accuracy. Such videos can be difficult or impossible to detect, even by experts, and as the technology advances deepfakes become even more convincing and easy to make.

While these moves are certainly steps in the right direction, they are likely not enough to stop the spread of fake news

Researchers and political observers around the world have understandably voiced concerns about the potential impact of deepfakes on the spread of information, as the very existence of deepfakes causes one to call into question the legitimacy of videos depicting well-known political figures, which were once considered ironclad evidence of a person’s speech and conduct. To illustrate this point, director Jordan Peele created a deepfake that appears to depict President Obama delivering a warning about the spread of disinformation. Even more disturbingly, deepfakes have also been used to create pornographic videos appearing to depict various well-known celebrities, in violation of these celebrities’ rights to control how their images are used in public forums.

As the dangers that deepfakes pose to individuals and to society as a whole are clear, it’s no surprise that Facebook has taken the step of banning this type of video on its site. However, given the extent of the spread of misinformation online, this action alone is not nearly enough to ensure that bad actors cannot subvert democracies by spreading fake news. For one, deepfakes are difficult to detect, even using computer analysis; as such, Facebook launched the Deep Fake Detection Challenge in an attempt to improve the technology that can determine whether a video has been digitally manipulated. And while Facebook continues to allow the spread of falsehoods in the form of political advertisements, the company has also partnered with independent fact-checkers with the aim of informing users when they are encountering false information.

While these moves are certainly steps in the right direction, they are likely not enough to stop the spread of fake news, especially given the level of sophistication exhibited by disinformation campaigns around the world, most notably Russia’s interference in the 2016 American presidential election and its likely interference in the upcoming election. While Facebook and other social media giants have learned some lessons from the election interference of the last several years, the rapid pace of technological advancement ensures that the fight against disinformation will not end anytime soon. 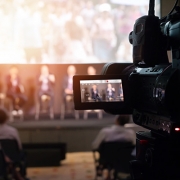 The Social Network, which dramatizes the rise of Facebook by depicting Mark Zuckerberg’s invention of the platform and the various lawsuits it spawned, was released in 2010 to widespread critical acclaim. But the social media landscape has transformed dramatically over the past decade, meaning today’s audiences likely have a much different view of Facebook and its controversial founder than those of the time of the movie’s release. As such, it is instructive to take a look back at this nearly ten-year-old classic to determine how the viewing experience has changed since the film initially hit theaters and whether the movie’s message about social media platforms continues to resonate. Happily, I can report that not only does the film hold up after nine years, but its message about the intersections of social media, technology, and society have never felt more prescient.

Reviews of the film from 2010 were overwhelmingly positive; The Social Network currently boasts a 96% approval rating on review aggregate site Rotten Tomatoes, as reviewers praised the film’s clever dialogue, immersive acting, and fast-paced direction. While some critics took issue with the accuracy of the film’s depiction of events, calling its perspective biased, they nonetheless conceded that the core dramatic elements of the narrative were expertly crafted and represented. In 2010, however, public perception of Mark Zuckerberg and Facebook was very different; though the social media site had already exploded in popularity, amassing hundreds of millions of users, few could have predicted scandals like the ones involving Cambridge Analytica and Zuckerberg’s refusal to ban false political advertisements. Nine years ago, many observers had a vague understanding that social media would have a tremendous societal impact around the world, but few could predict the parameters of this impact.

The Social Network’s portrayal of the character of Mark Zuckerberg is harsh, to say the least. The film’s version of Zuckerberg is highly intelligent and ambitious, prizing upward societal advancement above all else, but nonetheless feels egotistical contempt towards existing social institutions, including his own personal relationships. Indeed, the film opens with a breakup between Zuckerberg and his girlfriend Erica Albright, who tells him, “You are probably going to be a very successful computer person. But you’re going to go through life thinking that girls don’t like you because you’re a nerd. And I want you to know, from the bottom of my heart, that that won’t be true. It’ll be because you’re an asshole.” The events of the movie explore and mostly defend this interpretation of Zuckerberg’s character, as he destroys his remaining interpersonal relationships with his smugness, contemptuousness, and derision while simultaneously building the largest social network the world has ever seen. Zuckerberg ends the film completely alone, sending a friend request to his ex-girlfriend on the platform he created, knowing the odds that she’ll accept his request are slim to none.

In a moment that bore little significance in 2010 but resonates eerily today, the film’s Zuckerberg describes the concept of “The Wall” as an element of Facebook’s design, which to modern audiences evokes images of today’s polarized political environment, characterized by resentment and hatred.

At the time, many felt that this view of Facebook and Mark Zuckerberg was needlessly harsh and pessimistic, as it implied that the company is better at alienating people and empowering psychopaths than it is at facilitating connections. The film predicts the transformational impact of social networks through the character of Sean Parker, who at one point says, “we lived on farms, then we lived in cities, and now we’re going to live on the internet!” even as the film’s characters grow increasingly isolated and alienated, in large part as a result of the toxic and destructive personality of the website’s founder. Public opinion about Mark Zuckerberg and about social networks generally was largely neutral or positive in 2010, as Zuckerberg was recognized mainly for becoming the world’s youngest billionaire and for inventing an innovative and promising digital platform.

Today, however, public opinion has turned, particularly in the aftermath of social media’s enabling of the proliferation of fake news as well as successful attempts by Russia and other countries to leverage social media platforms to influence elections, which Zuckerberg has responded to less than forcefully. As such, The Social Network’s diagnosis of the societal impact of platforms like Facebook now seems more accurate than ever, as the paradox at the heart of the story, involving a combination of technology capable of connecting human beings with one another on an unprecedented scale and widespread feelings of isolation and social alienation, comes to fruition. In a moment that bore little significance in 2010 but resonates eerily today, the film’s Zuckerberg describes the concept of “The Wall” as an element of Facebook’s design, which to modern audiences evokes images of today’s polarized political environment, characterized by resentment and hatred. Accordingly, some critics have proclaimed The Social Network to be the defining film of the decade, as its themes serve as an ever better cultural critique today than they did in 2010.