You are here: Home1 / socioeconomic status 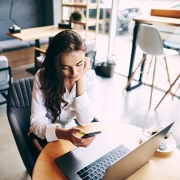 Whether it was folding shirts at a clothing store in the mall, making drinks at a cafe, or wiping down dirty tables as a busboy, we all remember our first entry-level, labor intensive, minimum wage job that helped fill our teenage pockets. Working as a teenager can be tough, but we all did it as a means to an end, I mean how else were we going to pay for gas now that we got our licenses?

However, according to a recent study posted by the company Resolution Foundation, the number of 16-17-year-olds who are currently enrolled in high school and working part-time has decreased by almost 50% within the past two decades. To simplify it, about 25% of all teenagers enrolled in school are also employed; in 1999, that percentage was 48.

So what happened? Researchers believe a big contributor to this decrease is due to the online job market. Teenagers can easily make money from the comfort of their own home by doing something they’re all experts in: using their phones. For example, DePop is an online eBay-like clothing app that allows users to post and sell items from their wardrobe. It’s estimated that about 2 million of the 13 million users of DePop are aged anywhere from 15 to 24. DePop states that their most successful users can bring in up to $2,000 a month.

Freelance work in general is also a great way that teens are making money. Not only can most freelance work be done remotely, but it can also help build a ton of skills and references to put on one’s resume. Writing, editing, proofreading, photographing, etc. are a few of the skills that freelancing can help build, and think of how amazing these would look on a college application.

Researchers have also concluded that teenagers are smart in regards to the economy, world, and politics, and understand that the job market is nowhere close to what it was twenty years ago. Most young adults are aware that the age old dream of retiring by the age of 65 is nothing more than just that, a dream. So since they’ll have to be working for longer than originally anticipated anyway, they’d just rather wait until post-grad life to do so and enjoy their youth while they have it; not the worst idea if you can swing it.

However, not all individuals can swing that, and many teenagers don’t want to work but may be in a position in which they don’t have a choice. This doesn’t necessarily have to be a bad thing. In fact, most experts believe that working as a teenager is important to build up stamina for working in the real world. That, and the fact that in our current economic state, it’s important to start building your resume as early as possible.

“School leavers and university graduates coming into the workplace too often lack key skills like resilience, team working and general awareness of appropriate workplace behavior. Particularly with young people from socio-economically disadvantaged areas, it’s not just about developing the right skills, it’s about demystifying the world of work and helping them to develop the confidence to take that next step from education into work,” said Amy Leonard, the chief executive of the Transformation Trust, which helps disadvantaged teenagers get into work.

According to a recent survey, almost 50% of all employers don’t believe that young adults who are recent graduates are ready for work. However, that just further adds to the classic dilemma of needing experience in order to land a job, but no job will hire you to gain said experience, because they also want you to have the experience before they employ you. Many employers wait for the candidates who are a little older and have further workplace experience. While that does technically make sense, it’s also the reason the unemployment rate amongst young adults/teenagers is so high.

As a teenager, going to school full-time while growing up is tough enough, but adding a part-time job on top of that can be extremely overwhelming. While many adults love telling their kids “I did both when I was your age,” it’s important to remember how different our world and economy looks compared to back then, and cut them some slack in regards to working. It is important to build up certain workplace skills while you’re younger, but it’s more important to enjoy life, so find the healthy balance between the two.