You are here: Home1 / Solar Observer 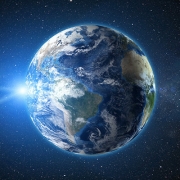 In a joint mission between the European Space Agency (ESA) and NASA, a spacecraft known as the Solar Orbiter has been traveling from the Earth to the Sun. The spacecraft is now officially halfway between the two, according to a report from ESA, meaning it is now 46.6 million miles from the Sun itself.

Solar Orbiter initially began its mission in November 2021. The craft has been, and will continue to, take in scientific observations as it makes its way closer to the Sun. The spacecraft is taking measurements of the solar winds and volatile corona.

The mission itself is also giving researchers a unique opportunity to deeply study space weather. Space weather is a feature of the solar wind; a stream of charged particles from the Sun that generate aurorae. These particles occasionally tend to disrupt electronics on Earth as well.

The Solar Orbiter is also taking a longer route to get to the Sun as a means of saving energy. The orbiter is also utilizing the gravitational pulls of Earth and Venus to slingshot itself inward. This maneuver also reduces the amount of fuel necessary to propel a spacecraft.

The orbiter’s current position between the Earth and Sun allows it to gather useful data on solar winds and how they move throughout our solar system. Researchers will be combining the data from the Solar Orbiter with data from other spacecraft that are within Earth’s orbit to get a more complex picture of the winds movements.

Daniel Müller, a Solar Orbiter project scientist with the ESA, said in a release that “from this point onwards, we are ‘entering the unknown’ as far as Solar Orbiter’s observations of the Sun are concerned.”

“The orbiter will make its closest approach—26 million miles from the Sun—on March 26. From March 14 to April 6, it will be within the orbit of Mercury, the closest planet to the Sun.”

“What I’m most looking forward to is finding out whether all these dynamical features we see in the Extreme Ultraviolet Imager (coined campfires) can make their way into the solar wind or not. There are so many of them!” said Louise Harra, a physicist at the Physical Meteorological Observatory in Davos.

Once the Solar Orbiter arrives at its closest approach later on this month, humans will be able to see some of the closest and clearest images ever taken of the Sun.