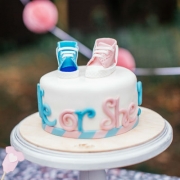 Last month, a woman died at a gender reveal party, or a celebration announcing whether expectant parents will be having a boy or girl. A piece of shrapnel from a homemade explosive struck Pamela Kreimeyer, 56, in the head and killed her instantly.

Members of the Kreimeyer family had experimented with different kinds of explosive material, the Marion County Sheriff’s office said. They built a contraption to release pink or blue powder revealing the gender of the new baby, which they aimed to film for social media.

But instead, the device exploded like a pipe bomb, sending pieces of metal into the air that hit Ms. Kreimeyer, who was standing 14 meters away. “This family got together for what they thought was going to be a happy event with no intent for anyone to get hurt,” the sheriff’s office said. “This is a reminder that any time someone mixes these things there is a high potential for serious injury or death.”

This is not the first time a gender reveal party has gone dangerously awry. Last year, a man shot a target so it would explode with either pink or blue powder, but sparked a 47,000 acre (19,020) wildfire in Arizona that raged for a week.

A video of a man in Louisiana feeding his pet alligator a watermelon filled with blue jelly provoked concerns over the animal’s welfare and its owner’s safety. And in Australia, a so-called “burnout” — when a car emits blue or pink smoke — went disastrously wrong when the vehicle burst into flames.

In 2008, Ms Karvunidis baked a cake with pink icing on the inside to reveal she was having a baby girl. She wrote about it in a blog and sparked a new trend. But that baby girl, now 10 years old, wears suits and short haircuts. Ms Karvunidis says her own perspective on gender identity has changed.

“Who cares what gender the baby is?” Ms Karvunidis posted on Facebook in July. “Assigning focus on gender at birth leaves out so much of their potential and talents that have nothing to do with what’s between their legs.”

Helen, a mother of a transgender child, agrees. She says gender reveal parties enforce “hideously stereotyped boxes where girls equal pink princesses and boys equal blue cowboys”. As children grow up, Helen says, these stereotypes prevent girls from studying traditionally masculine subjects like maths and science and instil in boys the belief that it is “feeble” to express emotions.

“It’s not just to do with gender,” she says. “What if your child is born disabled or doesn’t fit into a particular version of what a baby or child should be?” Helen says gender reveal parties prevent children from “being celebrated in all their infinite diversity. They are made to feel shameful if they don’t fit into this gendered stereotype”.

Sara is from the UK and was the first of her friends to throw a gender reveal party earlier this year. She had a difficult pregnancy that caused her significant pain and difficulty walking. She said the party created happy memories that kept her going.

“I don’t know how my mental state would have been if I didn’t have some kind of gathering like that,” Sara says. She planned games and revealed the baby’s gender by setting off a smoke grenade – a type of explosive. “I hadn’t done anything like that before,” Sara admits.

She read all the instructions and made sure the grenade was lit on safe grounds away from the public. Although she says it was a good way to celebrate and nothing went wrong, the Royal Society for the Prevention of Accidents (RoSPA) advises future parents to be mindful of safety.

Fireworks and smoke grenades “can seriously injure people and leave lifelong scarring and as such should be handled with care,” a spokesman said. RoSPA advise anyone planning to use them to familiarise themselves with the Firework Code.

And the gender of Sara’s baby? A girl. She was born premature at 34 weeks old, weighing 4 pounds 10 but she is now doing well. Sara describes herself as a “girly girl” and is looking forward to doing “magical fairy stuff” with her daughter. She does not believe gender reveal parties reinforce outdated gender stereotypes.

“People who are causing a scene I think are the ones causing the problem,” Sara says. “It’s not offensive.” She says she won’t mind if her daughter grows up to question her gender identity. “If she doesn’t feel right when she’s older that’s fine. But people are trying to make you think or believe that you should change all the time.”