You are here: Home1 / Sounds 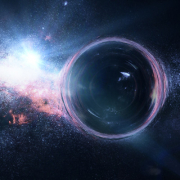 In a recent tweet from NASA, they revealed some mysterious audio from a galaxy cluster that can be found 240 million lightyears away from Earth.

The new sound waves that have been released were previously identified, but now for the first time they can actually be heard.

“Scientists say the black hole sends out pressure waves that cause ripples in the hot gas, which can be translated into a note,” according to Wesh.com

The actual note can’t be heard by a normal human ear. The note is roughly 57 octaves below that of middle C.

The black hole has been associated with the sound ever since 2003.

Astronomers figured out that the waves that were coming from the black hole ended up causing ripples within the hot gas which translated into the ominous note that was and can now be heard.

“The misconception that there is no sound in space originates because most space is a ~vacuum, providing no way for sound waves to travel. A galaxy cluster has so much gas that we’ve picked up actual sound. Here it’s amplified, and mixed with other data, to hear a black hole”

NASA ended up scaling the sounds up to their true pitch that way everyone would be able to hear the sound coming from within the black hole.

According to Business Insider, the scaled up sound is actually 144 quadrillion and 288 quadrillion times higher than what the actual frequency is.

The news broke across the internet and the outpouring of peoples reactions at being able to hear the interior of the black hole was astounding.

“Everyone is talking about how eerie this is, but, to me the way it just cuts off is by far the creepiest part,” said astronomy blogger Phil Plait.

When the clip was originally published, NASA shared a more pleasant version of the noise from M87 which was released by the Event Horizon Telescope project in 2019.

The incorporated music also came from Chandra telescope’s X-ray data along with audio of optical data from the Hubble Space Telescope and the Atacma Large Milimeter Array in Chile.

When listening, the loudest part of the M87 music goes along with the brightest part of the image shown which is right where the black hole can be found.