You are here: Home1 / speeches 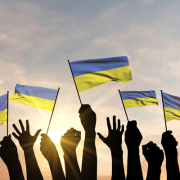 Both Ukrainian President Volodymyr Zelenskyy and Russian President Vladimir Putin spoke to their citizens to acknowledge Victory Day, an annual celebration of the Soviet Union’s victory over Nazi Germany in World War II.

“Today we celebrate the Day of Victory over Nazism, and we will not give anyone a single piece of our history. Our enemy dreamed that we would refuse to celebrate May 9th and the victory over Nazism, so that the ‘deNazification’ gets a chance. Millions of Ukranians fought Nazism.”

The Times tweeted how “President Zelenskyy vowed that his country would emerge victorious from its war. He said ‘The road to it is difficult, but we have no doubt that we will win.’”

Zelenskyy also argues that Putin is currently emulating the Nazi invaders from 80 years ago.

“The one who is repeating the horrific crimes of Hitler’s regime today — following Nazi philosophy, copying everything he did — he is doomed. We won then. We will win now. Very soon, there will be two Victory Days in Ukraine.”

Russian President Putin’s speech on Victory Day justified the war as he gave a defense of his country. While Zelenskyy delivered his message through a pre-recorded video located between anti tank barriers in Kyiv, Putin delivered his address to Moscow’s Red Square before a massive military parade.

“Defending the motherland when its fate is being decided has always been sacred, today you are fighting for our people in Donbas, for the security of Russia, our homeland,” Putin said, comparing the current conflict to the World War II efforts to remove Nazi Germany’s invading armies.

Putin continued to justify the war with Ukraine, calling it “inevitable.”

“The Kremlin had proposed a treaty to NATO last year that would guarantee Russia’s security. But that was in vain. The NATO countries did not want to hear us. And that means in fact that they had very different plans, and we could see that. They openly were preparing for yet another punitive operation in Donbas for an invasion of our historic lands in Crimea,” Putin explained.

“NATO has been actively developing countries that border Russia. An expansion of this Western military alliance was an absolutely unacceptable threat. The death of each one of our soldiers and officers is our shared grief and an irreparable loss for their friends and relatives,” he said.