You are here: Home1 / spirulina 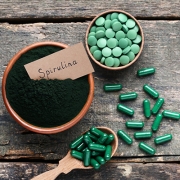 Spirulina is a blue-green algae that is taking over the health and wellness world. It’s become one of the most popular dietary supplements and has been unofficially labeled as a “superfood” amongst the community of people who take it for its extensive health benefits and nutritional content. According to the Times Of India, spirulina is high in protein and vitamins, and since it comes from algae, it’s safe for vegans and vegetarians to take.

Studies have suggested that spirulina can be used as an antioxidant and probiotic. Probiotics help aid digestion and calm intestinal inflammation, often individuals with dietary restrictions of any kind take a probiotic to make up for the nutrients they may or may not be getting based on their specific diet. These types of supplements are also great for boosting your immune system, and spirulina is no different. The probiotic elements of the “superfood” has been shown to improve gut health and increase the amount of bacteria in our stomachs. When people hear bacteria, they automatically associate it with germs, however, in this case the bacteria is actually essential for aiding digestion and keeping our intestinal linings strong and working.

According to Times of India, “Spirulina has no side effects and is packed with protein and vitamins. It also contains vitamins B-6, A, C, and K. One tablespoon (around 7 grams) of dried spirulina has: 20 calories, 4.02 g of protein, 1.67 g of carbohydrate, and 0.54 g of fat. It also contains trace amounts of calcium, iron, magnesium, and potassium.”

The combination of nutrients along with a low calorie count is the reason that spirulina was initially used as a “vitamin” supplement for individuals looking to lose weight. Not only is there little to no calories/carbs in it, but the massive amounts of nutrients and vitamin content helps balance out the things your body needs to function anyway. Think of spirulina as every single daily supplement and vitamin you’re supposed to be taking, all in one.

Studies also suggested that individuals who ate spirulina for three months consecutively, while living a relatively healthy and active lifestyle, showed improvement in their overall BMI, (body mass index) which refers to an individual’s weight in relation to their height and age.

There’s a whole multitude of benefits that come with taking spirulina daily. The best part is because it’s derived from algae, which is quite commonly found in nature, you can find any type of spirulina supplement at your local vitamin stores or online. They make a variety of ways in which you can consume it, the easiest most likely being a simple supplement tablet.