You are here: Home1 / Spotify podcasts 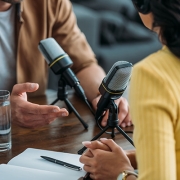 Streaming has become a staple in the world of entertainment. Not only are there now a ton of platforms to watch all sorts of original television shows and movies, but streaming has taken over the music industry as well. Between Apple, Google, Amazon, and Spotify there are plenty of ways for anyone to have unlimited access to some of their favorite artists/albums/songs. However, if we’re talking numbers, Spotify is the most popular service, with over 113 million paid monthly subscribers.

In 2020 Spotify’s content chief, Dawn Ostroff, wants to focus on a newer form of entertainment that’s entering into the streaming world: podcasts. In fact, Spotify invested about half a billion dollars into purchasing podcast-related companies in 2019, and they’re just getting started. While podcasts are certainly on the rise in terms of popularity, making such a large investment in a newer market is risky in terms of profits, however, Spotify has acknowledged in their own financial statements that they understand there’s no guarantee they’ll be able to “generate sufficient revenue to offset the costs of acquiring” the podcast content itself, but they’re still confident in their investment.

“I’ve always tried to go where people will eventually follow. It’s always more exciting to build something than to be sitting on top of a mountain after something is built, just trying to defend your place. Moving Spotify into the world of words means getting a jump start into a market that will pay off in ad revenue eventually,” Ostroff stated in an interview.

Spotify began implementing podcasts onto their platform back in October of 2018, with the launch of a program they called Spotify For Podcasters, giving users access to podcast episodes and all the stats behind it. Four months later the company bought both Gimlet and Anchor in what would become the half a billion dollar deal. Gimlet and Anchor were two of the largest podcast content producers in America before being absorbed into Spotify.

“Gimlet will focus on creating new podcasts exclusively for Spotify subscribers, and Anchor’s tools will enable creation for the next generation of podcasters worldwide. Gimlet and Anchor will position us to become the leading platform for podcast creators around the world and the leading producer of podcasts,” the company wrote in a blog post after the deal was finalized.

Other adjustments Spotify has already implemented include an app redesign for premium users which gave podcasts a more prominent spot on the home screen. The company also finalized a deal that would allow them to exclusively produce podcasts for Barack and Michelle Obama’s Higher Ground.

Spotify already began feeling the positive effects of their investment during their third quarter in 2019, in which users who listened to podcasts jumped by 40%. Now, more than 15% of Spotify premium users also actively listen to podcasts. This is significant because 90% of the revenue Spotify brings in is from its premium users monthly paid subscription. Spotify Premium typically costs $9.99 a month, however, there are specialty priced packages that combine your premium costs with a Hulu subscription as well. As a student at university, you can get the bundle for $5 a month, the company also offers a family plan for $14.99 a month.

One of Spotify’s biggest claims to fame is their ability to recommend new music to its users and create a slew of playlists and radio stations filled with musical content that their algorithm thinks premium users will enjoy based on their daily listening habits. When it comes to their podcasts, Spotify has shifted their focus to ensure the same attention is being paid to that section of the app.

Spotify currently has over half a million podcasts to choose from, and that number is only going to continue to rapidly grow as podcasts grow in popularity in general. However, it’s difficult for users to have access, or even know about, a majority of these podcasts because there’s no “radio stations” for different podcasts to be featured, at least not yet. Spotify wants to unify the data they have encoded for their music recommendations, and bring it over to the podcast side of things. One of the main ideas the company has is to implement advertisements on the podcast pages, and within the episodes themselves, that recommends content based on listening history.

For now, Spotify doesn’t have to worry too much, as podcasts are only going to become more and more popular, to the point that the app will likely be known for both them and music in the coming months.