Tag Archive for: stand up to cancer

You are here: Home1 / stand up to cancer 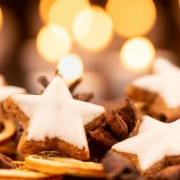 Every summer the Great British Bake Off hosts a celebrity bake off event in which famous individuals come into the tent and show off their skills in the name of charity. Last year the “Great Stand Up To Cancer Bake Off” was one of the most popular programs released throughout the UK and US as well, and this year will likely be no different.

The Great Celebrity British Bake Off will be returning to Channel 4 in the UK next week in what is being seen as a “wonderful celebration of people being terrible at baking.” This year’s series will also be raising money for Stand Up To Cancer, and will feature stars like Tom Allen, Daisy Ridley, Philippa Perry, and more!

In the recently released trailer Tom Allen is seen getting his bake temporarily stuck in the bottom of the freezer while Daisy Ridley is seen sculpting what looks like a dessert toilet. Philippa Perry is then shown piping the word “help” on top of her creation, proving that the series is all about having fun, baking some questionable desserts, and raising money for a great charity.

Robert Beckett is then shown talking about a technical challenge and referring to his as a “cow pat,” the camera then quickly pans to Allen who says: “I’m so embarrassed I could die.”

The trailer alone has British Bake Off fans anticipating an amazing season of one of their favorite shows. One fan claims that this trailer could’ve shown our celebrity guests as dealing with a lot worse when compared to last year: “In a previous series, YouTuber and presenter Joe Sugg fainted after cutting his finger in the opening minutes of a challenge.”

“This Morning presenter Alison Hammond thought that her oven door had gone missing (when it had retracted into the oven itself) and One Show presenter Alex Jones smashed a bowl after failing to attach it correctly to her KitchenAid, resulting in stitches. Incredibly, all of these incidents took place in the same episode.”

The pandemic has worked in the programs favor, as more celebrities had more time available to quarantine and be tested for the competition. The series will have five stand alone episodes as well that will not connect, so fans can watch whichever, whenever.

Other celebrities projected to appear on this season include Dizzee Rascal, internet star KSI, James McAvoy, Katherine Ryan, Little Mix singer Jade Thirwall, and Dame Kelly Holmes. Ridley was recently interviewed regarding her experience in which she claimed that she had “the best time, I didn’t do a great job but I didn’t cry, it was so much fun.”

For individuals in the UK The Great Celebrity Bake Off for SU2C starts on Tuesday, 9pm on Channel 4. For US watchers, they likely will have to wait for the series to be uploaded onto Netflix once it’s finished premiering in the UK; this is how the seasons are typically updated for the US.