You are here: Home1 / standard 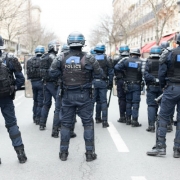 On Wednesday, roughly 27,000 police officers in Paris took to the streets to protest what they claimed were bad working conditions, a lack of respect from the general public, and a string of suicides in their ranks this year. The protest was the largest police demonstration in almost 20 years, and officers wore plain clothes, as the law does not allow them to protest in uniform. Although the protest complained about not being respected by the general public, the police officer’s public image in France has suffered as a result of the protests, which have drawn criticism about how harsh their tactics are. Protestors claim that the high number of suicides among police officers, totalling more than 50 this year alone, are a consequence of the intense degree of stress and public scrutiny associated with the profession.

According to a French parliamentary inquiry, the French police are affected by a number of problems which lower morale, such as unpaid overtime and poor working conditions. It’s not uncommon to find anti-police graffiti in France, and anti-police slogans have grown popular among crowds. The protestors claim though they are obligated to provide public service, they get nothing but scorn and derision from the public, making the job untenable and leading to the conditions that resulted in the tragic suicides of several dozen officers.

For a number of reasons, the police in France differ fundamentally from the police in the United States and other countries. For one, they don’t walk a beat, and instead the police are a national force, which uses aggression to handle conflict but otherwise doesn’t often interact with citizens. This style of work hasn’t done favors for the police force, who are sometimes taunted with encouragements of suicide and shot with rubber bullets. Although the government has promised psychiatric intervention to address the problem of rampant suicides, little other action has been taken to address the underlying causes of the crisis.

Although protests are fairly ubiquitous in France, they are generally uncommon among police officers, and as such the recent protest highlights the severity of the bad working conditions police have been complaining about. Although the Interior Minister Christophe Castaner has promised more money and hires for the police, this did little to quell the concerns of protestors. A government plan to revise pensions for police officers was criticized for jeopardizing the unique retirement benefits enjoyed by police officers.

The police officers’ protest comes in the aftermath of, and in some ways as a response to, the Yellow Vest Movement earlier this year which became violent after 13 consecutive weekends of demonstrations. The movement, which protests the presidency of Emmanuel Macron, started as a response to fuel taxes and other environmental policies that reduced the standard of living for the French population. Among the demands of the Yellow Vest protestors are the resignation of Macron, an increase in the French minimum wage, an end to austerity measures, an improved standard of living, greater transparency and accountability in the government, and better government services for rural areas, among other goals. While these protests are ongoing, the French government has made some concessions to protestors, including the cancellation of the fuel tax and the elimination of a tax on overtime and end-of-year bonuses.

The Yellow Vest protests have led to the deaths of 11 people, some of whom were protestors killed in traffic accidents while blocking roads, with an additional 4,000 people injured. The movement is a populist and economic one, focused on reforming the government to reduce the cost of living for the middle-class. Some protests have become major riots which have been described as the most violent ones in France since 1968. The intensity and size of the protests has led to a large-scale response from the police, who wear military-style riot gear, which has intensified criticism and public distrust of the police force. Both the Yellow Vest movement and the recent police protest signal a tremendous degree of social unrest among France’s citizenry, which is a trait shared in many countries around the world in the current global political climate.