You are here: Home1 / STEM studies 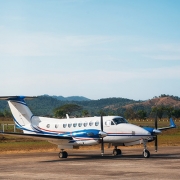 “This is my favorite aircraft. It’s called a King Air 200. I’ve got approximately 100 hours of flying on this aircraft. I absolutely love it, it just performs,” Refilwe Ledwaba said as she stood next to the hanger of the King Air 200 at the Wonderboom Airport in South Africa.

Ledwaba has made a major impact in South Africa through her advocacy for women’s rights, especially for their right to start careers in traditionally male-dominated fields, such as piloting. Ledwaba herself is both a helicopter and a fixed-wing pilot as well as a flight instructor for all prospective pilots in South Africa.

Her other accomplishments include being a goalkeeper for the Bill and Melinda Gates Foundation, which basically means Ledwaba could choose a specific group/charity to advocate and raise awareness for. For Ledwaba, that has become the Girls Fly Program in Africa. She also was the first black woman to be a police service pilot in South Africa.

“For a long time, I was the only black female that was holding the highest license for helicopters, but being the first for me is not important. The important thing is the 20th person, the 30th person, then we can start talking,” she said.

Ledwaba’s philosophy here couldn’t have come at a more relevant time. Reports claim that less than 10% of the world’s pilots, aviation maintenance technicians and airline executives are women, Ledwaba is ready to multiply that number five times over and she’s starting in Africa. As previously stated Ledwaba is involved with the Girls Fly Program in Africa (GFPA), but she’s not involved in the traditional sense of the word, she actually runs the entire foundation.

GFPA’s main goal is to introduce girls in elementary, middle, and high school to STEM subjects; science, technology, engineering, and math. When Ledwaba was a child, she was raised by just her mother, who also had to raise six other kids. Her mother always instilled a hard work ethic in Ledwaba, and made it clear to her from a young age that the possibilities are limitless when it comes to what she wants to do with her life.

Initially, Ledwaba claimed her mother inspired her to work hard to become a doctor, however, when she was in school she got a job as a flight attendant to help pay for her education. From that moment on she was fascinated by all things aviation, so much so that she began taking private flying lessons, which has led to her career today.

As the world develops and continues to industrialize, more careers are going to require a degree in STEM, so Ledwaba’s goal is to introduce these subjects to girls at a young age to spark an interest early on. More often than not, girls are steered away from focusing on STEM subjects in terms of specialized studies, and Ledwaba is gearing up to change that.

“I’m working to diversify the face of women in the aviation industry by being accessible, being available, and being visible. I want a future where a small child can just wake up like, ‘I’m going to do that one day,’ and not have doubts.”

She’s already held multiple aviation/space camp programs through GFPA in South Africa, Cameroon, and Kenya. Ledwaba also emphasizes on the GFPA website that while their focus is on empowering young girls, they also reach out to young boys as well to join their school outreach programs and camps. While the main goal is equality amongst the sexes in STEM careers, Ledwaba is just as invested in young people of all demographics gaining an equal opportunity to succeed if they want it. So far, the GFPA and Ledwaba’s work has helped over 100,000 young girls and boys through their multiple STEM programs.