You are here: Home1 / stop smoking 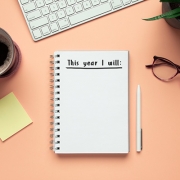 At the end of each year, millions of people resolve to improve some aspect of their lifestyle for the following year, whether these resolutions include a pledge to work out more, to stick to a diet, or simply to read more books. However, most people don’t end up keeping their resolutions as the year progresses; in fact, according to various sources, only 25% of people continue their new habit a month after making a New Year’s resolution, and only 8% of people maintain their resolution into the following year. Habits can be hard to break and it’s even harder to keep new habits over time; as such, when making a New Year’s resolution, you should have a realistic and well-thought-out plan for how to accomplish your goal.

One of the biggest mistakes people make when deciding upon New Year’s resolutions is being too ambitious. The start of the year seems to many of us like an opportunity to remake ourselves for the future, as expressed by the popular phrase “new year, new me.” However, while it may seem motivating to set high expectations in this way, seeing the change of the year as a new beginning is a way to set yourself up for failure. This is because in reality human beings are creatures of habit, and as such we are all likely to simply continue our existing habits into the new year, just as we would at the start of a new month or a new week. Instead, it’s a better idea to start with a small goal, and gradually work towards increasing the scope of your goal. For instance, if you’re somebody who doesn’t work out but wants to get fit, resolve to go to the gym once a week instead of five times a week, and then gradually increase the frequency of your gym visits as time goes on and you grow accustomed to this lifestyle change.

Another mistake is to make resolutions based on the outcome of a behavior, not the behavior itself. Though we all have some control over the habits we maintain, there are some things people tend to make as their resolutions which are entirely outside of their control; for instance, if someone’s resolution is to find love within the year, they could be setting themselves up for failure, as whether or not a person finds love depends heavily on factors outside of one person’s control. Instead, a better goal would be to take concrete steps to hopefully improve the probability of that outcome, such as attending more social events and using online dating services.

An additional tip is to ensure that your resolution is thoroughly planned and specific. If your New Year’s Resolution is to lose weight, for instance, you’ll find yourself failing to achieve that goal unless you are clear with yourself about how you plan to go about doing so. Instead, spend some time researching the most effective strategies to lose weight, such as determining how often to exercise and how many calories to eat each day. As with many personal goals, the answer to how best to lose weight varies dramatically from person to person, so it is essential to educate yourself about the basics of nutrition and exercise in order to tailor your plan to your individual needs. Writing this plan down and keeping a detailed calendar of how you are progressing are two excellent ways to ensure that you maintain motivation throughout the year to continue your habit, and these strategies provide the added benefit of enabling you to track your improvement over time.

Finally, don’t be too hard on yourself! Even when we forgo setting ambitious goals for the new year, we often overestimate our ability to carry through with a plan when it comes to New Year’s resolutions, and as a result don’t meet our own expectations of ourselves for the new year. At this point, many of us give up on our goals, feeling that we have failed to achieve what we set out to do. Instead of doing this when you perform more poorly than you had hoped, view the mistake as an opportunity to learn, and consider what factors led you to fall short of your goal. Doing so will allow you to avoid making the same mistake in the future and increases the likelihood of maintaining your resolution through the end of the year.