You are here: Home1 / student debt 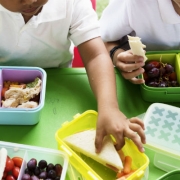 Ryan Kyote is a third grader who made headlines this year for his huge act of kindness. However, what started as a heartwarming story about giving back, quickly turned into a negative commentary about the current state of funding for our public school systems, and discussions over social class advantages. Kyote’s elementary school had a system for buying school lunches, which cost on average $3.25, that stated if a child couldn’t afford to buy a lunch they could begin accumulating a debt with the school that would eventually have to be paid off. The school claimed that even if a child had a negative account balance that they could still purchase a meal, however, after a few times families were strongly discouraged against accumulating even more debt for their child. Ryan was devastated when he learned about how many of his classmates were going without lunches everyday. So out of the kindness of his own heart, he saved up enough of his allowance money to pay off his entire third grade classes lunch debt, which totaled $74.50.

“I want them just to realize people actually think about them instead of just telling them what they did because you’re just bragging about stuff. I want them to feel happy that someone cares about them,” Ryan said.

When this story first began circulating it took the tone of an inspiring good deed news story with a happy ending. However, that mood greatly shifted when people began to ask, “isn’t it kind of messed up that a 9 year old is putting more initiative into our public school funding problems than our actual government?” And those individuals were not alone in their concern. Soon the story began trending nationwide, and people from all over were sharing similar stories of young students taking initiative to make sure all children are taken care of equally. The disapproval of the school systems inner workings also began to be brought more into light, and everyone was beginning to realize that this is a serious nationwide dilemma and something needed to be done.

So, California, Kyote’s resident state, decided to take action and draw inspiration from the 9 year old’s advanced work ethic and desire to do right by our nation’s students. Specifically, California Governor Gavin Newsom signed a measure into law that guarantees state-funded lunches to be given to all public school students regardless of any student debt or unpaid meal fees, according to The Hill Magazine. It also specifically outlaws “lunch shaming” a form of bullying that also came into discussion when Ryan Kyote’s story went viral. Many schools across the country have much cheaper alternative lunch options for its students who are struggling financially. The lunches normally look much simpler and less inclusive than the standard option, which has caused bullying based on socioeconomic status to flourish. The law guarantees that no school will tolerate any form of shaming or bullying between students in regards to lunch debts or general financial situations, and in addition the law amends “the Child Hunger Prevention and Fair Treatment Act of 2017 by requiring school districts, charter schools and education agencies to invalidate policies that ask officials to give alternative meals to students with unpaid fees,” according to The Hill.

While it can universally be agreed upon that our country’s elementary school students should never have to take world policy and funding issues into their own hands, Ryan Kyote definitely is a huge inspiration for evoking a real change. Not only did his act of empathy and kindness warm the hearts of millions of Americans, but it actually made a legal difference.

“Creating a ‘California for All’ means ensuring schools are inclusive, accepting, and welcoming of all kids,” Newsom said to The Hill before Ryan Kyote for bringing national attention to the issue. “He showed how at many schools across the country, students whose parents are not able to pay for their lunch are given a cheaper, ‘alternative’ lunch that causes them to stick out from their peers, which isn’t right. We thank Ryan for his empathy and his courage in bringing awareness to this important issue, and inspiring a real change.” 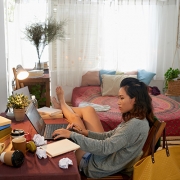 If you are or were a college student in the United States, then you most likely know that a majority of your tuition bill is actually room and board costs. More times than not, this aspect of tuition is the most expensive, and tends to be double the cost of standard attendance for most universities.