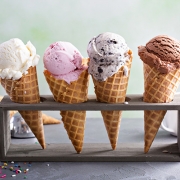 Enjoying some ice cream in the hot South African sun sounds like a no brainier. The long summer months and dry desert atmosphere surely is enough to keep the frozen dessert industry in business, however, this new Cape Town start-up is looking to not only open the minds of ice cream lovers everywhere, but also show the world just how sustainable the food industry can really be; and they’re doing it with bugs.

Gourmet Grubb is a new luxury ice cream establishment in Cape Town, South Africa, and they’re quickly becoming known as the start-up that makes its food with bugs. Yes, you read that correctly; when looking for a new and sustainable way of making this classic dessert, Gourmet Grubb discovered that using EntoMilk is not only beneficial to the environment, but offers a dairy-free ice cream option as well.

EntoMilk is a dairy alternative that is made by “blending the larvae of a tropical insect known as the black soldier fly.” Before you immediately write-off EntoMilk based ice cream as gross and weird, know that around the world there are about 1,900 different insect species that are consumed by human beings as a regular practice. While eating bugs hasn’t really infiltrated Western culture too much, there are plenty of different areas of the world that enjoy insects as a delicacy or snack, it just depends on where you are.

Flavors of the ice-cream include all the classics like vanilla, chocolate, and peanut butter, and a few specialty flavors like Christmas Spices. The EntoMilk apparently gives the ice cream a “slightly earthy undertone with an overall rich and creamy taste,” according to Leah Bessa, a co-founder of Gourmet Grubb.

According to their website, EntoMilk has five times the amount of protein and nutrients when compared to traditional dairy products. Additionally it contains large amounts of fat, minerals, zinc, iron, and calcium, all of which are traditionally found in protein enriched foods like beef, however, EntoMilk is way more concentrated in all of these things compared to beef. The milk is also lactose and gluten-free, and doesn’t contain any sugar or carbs; traditional ice cream can’t say any of that.

Besides being better for you, the means of creating this EntoMilk-based ice cream is much more environmentally sustainable compared to most other food industry means of production and distribution. This is important as one of the biggest industries contributing to climate change is the industrialized factory means of producing food. The United Nations has claimed that the entire planet will need to double its food production to keep up with the rising population rates. To avoid a massive famine epidemic, this change needs to occur by 2050.

“We decided to focus on an industry [food] that is under a lot of pressure due to animal welfare and environmental concerns. Insects aren’t sentient beings, and they only grow in the conditions in which they thrive, so the farming conditions cater to their animal welfare needs. Insects need very little water, feed and space to grow. They also produce little/no greenhouse gases compared to traditional livestock,” said Bessa.

Insect farming is also much more environmentally conscious because it can be done indoors, meaning in more metropolitan areas. Transporting farm-grown produce/products from rural farms burns fossil fuels and emits tons of greenhouse gases into the atmosphere. In a more localized indoor setting, these bugs can grow, thrive, and contribute, without having to worry about daily weather patterns affecting their growth.

The data doesn’t lie, insect livestock is going to be a major part of our food industry in the future, it’s just an idea a lot of human beings will have to grow accustomed to. It’s estimated that by 2023 the global edible insect market will reach a market value of $1.2 billion, making Gourmet Grubb fairly ahead of the curve. So much so that they’re even experimenting with some popup stores where they serve more insect-infused dishes like pasta.

“We need to find alternatives that will be able to sustain the growing population and create a sustainable and environmentally friendly farming system. The only way EntoMilk can truly make a difference and reduce the pressures of traditional dairy is if it is accepted and consumed on a global scale,”  said Bessa.