You are here: Home1 / tardigrade 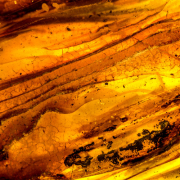 Microscopic tardigrades are a species that have lived on Earth for more than 500 million years. It’s thought that these miniscule creatures will also outlive humans, however, due to their extremely small size, they don’t typically leave behind fossils for us to learn about them.

Recently, however, scientists discovered the third-ever tardigrade fossil on record, and they found it suspended in a piece of 16-million-year-old Dominican amber.

The species found within the amber has been classified as Paradoryphoribius chronocaribbeus, a new species thought to be a relative of the modern living family of tardigrades known as Isohypsibioidea. This is the first tardigrade fossil to appear during the Cenozoic era, the current geological era that the Earth is in which began 66 million years ago.

The study on this discovery was published this week in the Proceedings of the Royal Society B, a scientific publication.

Beneath a microscope, these tardigrades look like little water bears. They’re known for their ability to survive and thrive in extreme environments, which is why they’ve been around for so long. They’re no longer than one millimeter, have eight legs with claws at the end, a brain, nervous system, and a pharynx behind their mouth used to pierce food.

“All of these details are incredibly well preserved in the new fossil specimen, down to its tiny claws. The discovery of a fossil tardigrade is truly a once-in-a-generation event,” said Phil Barden, senior author of the study.

“What is so remarkable is that tardigrades are a ubiquitous ancient lineage that has seen it all on Earth, from the fall of the dinosaurs to the rise of terrestrial colonization of plants. Yet, they are like a ghost lineage for paleontologists with almost no fossil record. Finding any tardigrade fossil remains is an exciting moment where we can empirically see their progression through Earth history,” Barden said.

The fossil will now allow scientists to observe all the evolutionary changes this species has endured within the past hundreds of millions of years. Javier Ortega-Hernandez, the study’s co-author, claimed that at first, they didn’t even notice the fossil in the piece of amber they collected.

“It’s a faint speck in amber. In fact, Pdo. chronocaribbeus was originally an inclusion hidden in the corner of an amber piece with three different ant species that our lab had been studying, and it wasn’t spotted for months. Close observational analysis helped us determine where the new species belongs on the tardigrade family tree. The fact that we had to rely on imaging techniques usually reserved for cellular and molecular biology shows how challenging it is to study fossil tardigrades. We hope that this work encourages colleagues to look more closely at their amber samples with similar techniques to better understand these cryptic organisms,” Ortega-Hernández said in a statement.

“We are just scratching the surface when it comes to understanding living tardigrade communities, especially in places like the Caribbean where they’ve not been surveyed. This study provides a reminder that, for as little as we may have in the way of tardigrade fossils, we also know very little about the living species on our planet today,” said Barden.