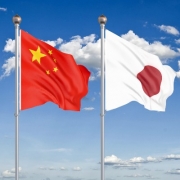 China has hit the headlines again this week after they announced they had renamed some undersea features in the East China Sea, an area that is hotly disputed and has stirred up the tensions between themselves and Japan over who has the sovereignty rights over the remote islands that are located in that area.

China’s Ministry of Natural Resources announced in an online notice that they were renaming fifty features, which includes terraces, sea knolls and canyons amongst others, in an attempt to ‘standardize topographical names’.

The features are located near an area that China refers to as the Diaoyu archipelago – with three of the underwater features being named after Diaoyu – however the government in Japan refers to the same area as the Senkaku Islands and had recently passed a bill renaming the area that the islands sat in to Tonoshiro Senkaku. Previously the region had been known as Tonoshiro and it is believed that by adding ‘Senkaku’ Japan had exerted further claims to the area.

The bill, which would come into effect from October 1, was passed at the Ishigaki City assembly in Okinawa, Southern Japan and was intended to resolve any “administrative confusion” between the region and an area in Ishigaki that is also called Tonoshiro.

In Japan residents are required by law to set their family registry to anywhere within the Japanese territory, even if they do not live there. Currently there are 48 families registered throughout five uninhabited islands while a further 76 people have confirmed that their homes are there.

However the Chinese foreign ministry had argued that the move was “a serious provocation to China’s territorial sovereignty, is illegal, invalid, and cannot change the fact that the Diaoyu Islands belong to China. We firmly oppose this move taken by Japan.” The ministry’s spokesperson, Zhao Lijian, continued that “China’s resolve and determination to protect its territorial sovereignty are unwavering.”

The uninhabited islands have been the subjects of several sovereignty claims over the years, not only from China and Japan but also from Taiwan.

The latest moves from both countries have caused already strained relations between them to be stretched further. Tensions between China and Japan had already been provoked after Tokyo criticized the upcoming national security law Beijing are implementing in Hong Kong.

In an attempt to maintain some sort of peace as well as keep the East China Sea in a stable position, Taiwan’s presidential office spokesman Xavier Chang has pleaded with both countries to remain calm, saying that the current disputes are not “conducive to regional peace and stability”.

Taiwan’s local council in Yilan County then opted to change the name of Uotsuri Island, which had previously been known as Diaoyutai, to Toucheng Diaoyutai.

Tokyo appears to have refused to get involved with Yoshihide Suga, Chief Cabinet Secretary commenting, “It is not our place to comment on a local mayor changing the name of the district after getting an approval from the local assembly.”

The moves have also promoted naval action in the area with the Chinese coast guard confirming they had to send ships to the area at the beginning of the week. Meanwhile, Taro Kono, Japan’s defence minister, confirmed that they had detected a submarine close to one of their southwestern islands and that it had come from China.

Situated around 200km southwest of Okinawa Island and 200km northeast of Taiwan, the Diaoyu/Senkaku islets have been the subject of tension for many years, although things got worse in September 2012 after Japan chose to place them under state control.

However both Chinese President Xi Jinping and the Japanese Prime Minister Shinzo Abe came to an agreement in 2017, pledging to put an end to the territorial disagreements and make a ‘new start’ on improving bilateral ties.

Over the years both countries have resorted to changing the names of geographical areas and features in an attempt to stake their claims on them if there is any disputes on the sovereignty. China has also recently renamed a further 80 features in the South China Sea in their dispute over ownership with the Philippines, Vietnam, Brunei and Malaysia also putting in claims that they own the area.

Based on their ‘nine-dash line theory’, China is now placing claims to the South China Sea even though certain parts of the area are thousands of miles away from mainland China.

If successful the self-declared East China Sea Air Defense Identification Zone (ADIZ) would give Beijing full control over the airspace in the disputed areas, thus laying further claim to the Pratas, Paracel and Spratly groups of islands.

Secretary of National Defense of the Philippines, Maj. Gen. Delfin N. Lorenzana commented on China’s move, which Beijing had allegedly been planning since 2010, saying, “It is my fervent hope that China would not proceed with this planned action for the continued peace and stability in the entire South China Sea”.

He continued, “An ADIZ by China over the entire South China Sea would arrogate unto itself a vast sea considered to be a global commons that has been opened for millennia to all for navigation and fishing.”