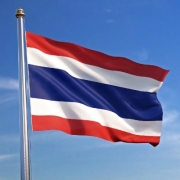 The government in Thailand has declared a state of emergency in Bangkok after a royal procession was blocked by protesters.

The convoy, which had been traveling through the streets of the Thai capital, was escorting Queen Suthida on her way home after attending the Grand Palace for a Buddhist ceremony.

Protesters witnessing the convoy heckled the Queen and her companions before raising their hands in a three-finger salute. The salute, a symbol copied from the blockbuster movie The Hunger Games starring Jennifer Lawrence and Liam Hemsworth, is used as a symbol of defiance in Thailand and was made illegal in 2014 after the military junta took control of the country in a revolution that shook many across the world.

According to the lese-majeste law anyone found guilty of disrespecting a member of the royal family will be jailed with the law stating that “whoever defames, insults or threatens the king, the queen, the heir-apparent or the regent shall be punished with imprisonment of three to 15 years.”

Following the protest the government declared a state of emergency due to “certain groups of perpetrators [who] intended to instigate an untoward incident and movement in the Bangkok area by way of various methods and via different channels, including causing obstruction to the royal motorcade.”

The announcement saw a crowd of protesters head to the offices of Prime Minister Prayuth Chan-ocha, demanding he step down from his position in power. Riot police were subsequently called in to remove the protesters.

The main party of protesters, mainly students, are demanding a new constitution as well as a shake up of the monarchy.

As well as the protesters, the Queen and her party had been met by monarchist counter-protesters who not only support the country’s monarchy, but also their government.

It was clear that the protest falling on the 47th anniversary of the 1973 uprising, when many protested against the military dictatorship, was not an accident.

According to local police, 22 protesters have been arrested and include Arnon Nampa, a human rights lawyer, as well as Parit “Penguin” Chiwarak, both of whom are believed to be the leaders of the group.

It was also confirmed by the Thai Lawyers for Human Rights group that Panupong Jadnok, a leading activist, had also been arrested.

More than 500,000 people have viewed a Facebook live stream, which saw police officers detailing the charges against leading student protester Panusaya Sithijirawattanakul. The young woman was later carried to a waiting police car.

Speaking of the decision to install a state of emergency as well as the subsequent arrests, Thanathorn Juangroongruangkit – leader of the Future Forward Party and opposition politician – said that the moves were “pushing Thailand to a breaking point.” He continued that he believed “the government must release the protesters and end the emergency decree”.

Thanathorn Juangroongruangkit is not the only person to condemn the actions with Amnesty International slating the move. The human rights organization has demanded that the Thai government “engage in constructive dialogue with the protesters,” an act many do not believe will happen.

Speaking on behalf of the government, Anucha Buraphachaisri said that due to the continuing moves by protesters, including those who insist on either insulting a member of the royal family or blocking their route, the harsh restrictions had to be implemented.

Under the new measures the capital city will see checkpoints installed for ‘security purposes’ although many believe this is a further erosion of their human rights and freedoms.

However those protesting do not seem fazed by the regulations with Bangkok’s shipping district filling with thousands of protesters just a few days later.

Chanting ‘Free our friends’, a clear demand for those arrested at the motorcade, police stood by and allowed them to protest peacefully.

“What seemed to be a low-boil stalemate that the Prayuth government was managing with reasonable success has now, following the incident involving the procession of the queen’s motorcade down a street in which an active protest was under way and the arrests of protest leaders, become a full-blown crisis.”

He continued, “unlike 48 hours ago, the country is in dangerous territory now.”

The protest movement had been launched some time ago however the on-going Covid-19 pandemic had put a halt to their proceedings. At the time of writing numbers of confirmed cases in the country have risen to 3,669 with 59 deaths. In July the numbers started to drop and the movement were able to ramp up their cause.