Blog - Latest News
You are here: Home1 / News2 / Culture News3 / The Arguments in Favour of A Four-Day Working Week 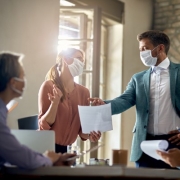 The pandemic has proven to be a trying and unprecedented time for everyone. Our life plans, daily routines and in some cases, livelihoods have been disrupted. However, in terms of the workplace, for many companies, the enforced lockdown procedures to safeguard against the spread of COVID-19, has illuminated areas which can be adapted to better or different working systems. For one, remote working has proven useful and easily implemented for some businesses. Other businesses, will not be able to effectively adopt remote working but for those who can, some workers and employers may look to making this a permanent measure. In the UK, many, if not all companies, have taken a massive hit in income due to the pandemic. Therefore, many people, have sadly lost their jobs or were furloughed, others, have had to take salary cuts in order to keep their jobs. However, an old solution may be to implement a four-day working week.

Although the notion four-day working week has been knocking around for some time, in the UK, the proposal of a four-day working week was put forward by the Labour political party, gaining momentum in their 2019 election campaign. These calls have been reignited in light of the current coronavirus crisis in order to better heal the UK economy. In June, a group of MPs sent a letter to UK Chancellor Rishi Sunak, urging the reduction of working hours to provide greater opportunities as unemployment levels rise. A shorter working week would restructure the economy so that work is shared more equally and less people lose their jobs. The Independent reported the letter, which stated: “shorter working time has been used throughout history as a way of responding to economic crises. They were used as a way of reducing unemployment during the Great Depression of the 1930s, which led to the normalization of the eight-hour day and the 40-hour week.”

The coronavirus pandemic has meant that millions of workers have had to work remotely, different hours or even on a part-time basis. Many have found that the pressure and stress of working life before the pandemic, is incomparable to the perhaps more productive layout of remote working or reduced hours. Some businesses may have found workers to be more engaged and constructive under these circumstances. Further, once the stress and tension of the coronavirus pandemic lifts these productivity and efficiency levels may grow further. The letter, published in part by The Independent continued:

“A four-day week would bring multiple benefits to society, the environment, our democracy, and our economy (through increased productivity).

One of the biggest impacts would be better mental health and wellbeing across the board with more time available for socializing, family and community.

Three quarters of UK workers already supported a four-day working week before the coronavirus pandemic hit and millions of workers have now had a taste of working remotely and on different hours. It’s in no one’s interests to return back to the pressure and stress that people were under before this pandemic.”

On the efficacy of a four-day working week Stylist reported, ‘last year, an experiment carried out by one company in New Zealand found it boosted productivity among employees. Microsoft Japan also reported that staff productivity leapt by 40% after a one-month trial. In 2018, the Trades Union Congress (TUC) reported that “eight in 10 workers (81%) want to reduce working time in the future – with 45% opting for a four-day working week”. As a result, the TUC advised that “the UK should consider how to move to a four-day week over the course of this century”’

The UK’s consideration of a four-day working week, may have been prompted by New Zealand’s Prime Minister, Jacinda Arden, who suggested that employees consider a four-day working week within the COVID-19 crisis to boost the tourism industry. Wired also reported: ‘We have proof that a four-day week works. Germany rolled out the Kurzarbeit, literally ‘short work’, scheme during the 2008 financial crash to mitigate mass unemployment, subsidizing a reallocation of labour. The government part-paid the salaries of millions of people during the financial downturn to avoid mass unemployment — and has turned to the same scheme again during the coronavirus crisis,’ going on to report that businesses that did adopt a four-day working week or reduced hours found that staff were more productive, less stressed, happier and took fewer days off ill. However, some disparity may occur if some employees feel as if they’re cramming five days’ worth of work into four days at a lower pay bracket.

How Has Coronavirus Affected The Economy?