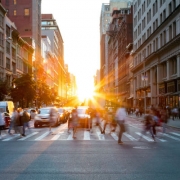 The largest project was a roughly 308,000-square-foot warehouse from Thor Equities

A planned office project in Red Hook that Thor Equities decided to scale back was still large enough to top the list of the largest projects coming to New York in September.

Overall, the list was split between four projects in Brooklyn and two each in Queens, Manhattan and the Bronx. No Staten Island projects made the cut last month.

The full list of September’s top 10 biggest real estate projects is as follows:

1. 270 Richards Street, Brooklyn The largest project filed in the city last month was Thor Equities’ plans for a roughly 308,000-square-foot warehouse in Red Hook. The one-story project will stand 41 feet tall. Thor had previously planned to build an 800,000-square-foot office project at the site but scrapped those plans earlier this year to build a last-mile warehouse instead. It will be one of the inaugural projects under the company’s new ThorLogis division, which focuses on buying and developing logistics properties.

2. 72-01 Queens Boulevard, Queens The Hakimian Organization’s plans for a 346-unit mixed-use development in Woodside took second place last month. The 12-story project will span about 286,000 square feet with 18,000 square feet of commercial space, and Hakimian bought the site in September 2018 for $33 million. The firm expects to start construction before the end of the year.

3. 430 Main Street, Manhattan A 269,000-square-foot project on Roosevelt Island from Related Companies took third place. The mixed-use development will be split between 265,000 square feet of residential space and 4,000 square feet of commercial space and stand 29 stories tall with 365 residential units. The project appears to be part of the nine-building Riverwalk development Related is constructing on Roosevelt Island with Hudson Companies.

5. 241 West 28th Street, Manhattan MaryAnne Gilmartin’s firm L&L MAG is planning to build a roughly 225,000-square-foot mixed-use project at this Chelsea site, where the firm inked a 99-year ground lease late last year. The development will stand 11 stories tall with 266 residential units and include about 10,000 square feet of commercial space and 214,000 square feet of residential space. The project is smaller than what Gilmartin had initially planned for the site, which she said was a 22-story project with 460 residential units and ground-floor retail across about 372,000 square feet.

6. 589 Christopher Avenue, Brooklyn Procida Companies is planning this 187,000-square-foot mixed-use project for Brownsville, split between about 173,000 square feet of residential space and 14,000 square feet of commercial space. The building will stand 11 stories tall with 208 residential units, and Perkins Eastman will design it.

After a Hard Diagnosis, One Athlete Learns to Soften Up

El Camino: An Entertaining, If Unnecessary, Epilogue
Scroll to top