Blog - Latest News
You are here: Home1 / Around The Web2 / Lifestyle3 / The Bond Watch is Revealed 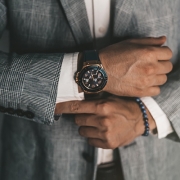 OMEGA is delighted to unveil 007’s newest timepiece that will feature in the 25th James Bond film, No Time To Die, set to arrive in cinemas in April 2020.

Appearing on-screen will be a thrilling new Seamaster Diver 300M 007 Edition. First launched in 1993, the Diver 300M has built its legacy with real-life divers and style aficionados, as well as becoming the quintessential wrist-wear of James Bond.

OMEGA has worked closely on the development of the Bond watch with Daniel Craig and the filmmakers, whose knowledge of James Bond has brought invaluable insight to OMEGA’s watch developers and designers. Daniel Craig’s own experience as 007 has also influenced this exciting final design.

James Bond’s story with OMEGA begins. When 007 is trapped in the villain’s armoured train, with the seconds ticking away before it explodes, the British spy uses the watch’s built-in laser on the bezel to cut through the steel plate, enabling him to leap free in the nick of time.

U.S. Kids Not Getting Measles Shots Before International Travel