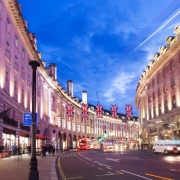 The high street has been left devastated by the widespread impact of COVID-19 and despite the vast majority of shops now reopening, nothing can replace the months of lost income and outgoing expenses which have left many retailers struggling to get back on their feet. In a move to help lessen the burden and prevent the closure of many small businesses, The Crown Estate which owns one of the UK’s most popular shopping locations Regent Street, is offering to switch retailers over to a turnover-based rent agreement. Such a move would enable retailers to better align their costs with their sales as they start the difficult and uncertain road to recovery.

The switch to turnover-based rental payments is entirely optional and would equate to around 9% of turnover, or alternatively a percentage of what they would usually receive each quarter in rent payments. It has been implemented with smaller and independent businesses in mind, as they typically don’t have the cash flow to cushion the reduction in income, and would otherwise have to close down completely.

According to reports in The Sunday Times, The Crown Estate which owns all of Regent Street and half of St James’s, will offer a sliding scale for rental payments, starting at 0% for the current period and rising to 75% by next month. Each retailer will be assessed on a case by case basis so that they can be helped to return to business the safest and most sustainable way.

The Crown Estate is a substantial business entity, it is estimated to be worth over £14 billion and contributes a proportion of its trading profits to the sovereign grant, which is responsible for financing the royal family. It has also been reported to be investing heavily in a redevelopment plan for its central London locations; funding projects worth around £1.5 billion.

Such support and investment is clearly needed, as reports have suggested that billions could be lost from the London shopping scene without the promise of further government support, and that over 50,000 jobs could be at risk in the coming months. Most of their business relies on custom from tourists and local office workers, and with reports suggesting that visitors to the capital in the past month are 73% lower year on year for the same period, it is clear that it is going to be some time before the pre-COVID levels are restored. For many, this gap in sales is the difference between surviving and folding, so it is understandable that further government support will be needed to keep them moving forward.

The challenges facing London’s retailers is likely to be mirrored across the country and internationally too. Being given the green light to reopen may have seemed like the end goal, but in reality, it really is just the start of a difficult and uncertain path ahead. Many retailers, particularly restaurants, rely on a certain level of trade just to break even and this is before they make any profits. The new guidelines to ensure they are ‘COVID-Secure’ means that they can accommodate considerably lower levels of customers at any given time, which naturally shifts their economies of scale in the wrong direction. For some, the extension of home-based working means that there simply isn’t the usual daily traffic from local office workers, commuters and those coming from further afield for business meetings or events. The most worrying part of this is that we simply don’t know when or even if these people will return. The stark reality is that even with the restrictions removed, some businesses simply won’t be able to create a viable stream of income and despite their best efforts, are heading for certain closure over the coming months. Coupled with the constant worry that the UK will experience a second wave of COVID-19 later this year, the next 12 months are likely to be turbulent and unforgiving for many hard working individuals and organisations that have done their very best to keep going during the pandemic.

Whilst the government are being pressed to provide more support, the move by The Crown Estate has been welcomed and championed as an example of how everyone involved in keeping retailers afloat needs to play their part in supporting the high street. From landlords negotiating rental payments, to energy suppliers and IT providers, there are a number of operating costs associated with keeping a retail, hospitality or leisure operation in business. It’s no good shaving some off one area if the others are not willing to follow suit too. Therefore, it is expected that there will be growing pressure on various sources to offer more flexible and affordable payment options so that retailers can cope with the reduced levels of business that are expected in the difficult months that lie ahead.