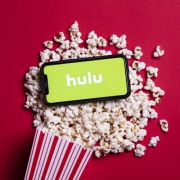 Margaret Atwood’s dystopian novel, The Handmaid’s Tale was first published in 1985. Set in a future totalitarian state, Gilead, once the United States of America, the novel explores the role of women in a dystopian, patriarchal world where their rights have been completely stripped away from them. The book follows Offred’s tale, a woman in servitude to a high-ranking family, as a Handmaid. She is bound to serve her imprisoners by many means, but one in particular, conceive a child through ceremonial rape. In 2017, Hulu aired the first season of The Handmaids Tale series to critical acclaim, quickly being renewed for further series. It won eight Primetime Emmy Awards from thirteen nominations, including Outstanding Drama Series. Hulu have now announced that Season 4 will arrive in 2021 and have released a teaser trailer.

The Handmaids Tale was renewed for Season 4 before Season 3 had finished airing but no dates were given as to when it would be released. Amidst the coronavirus pandemic, much of the film industry has been placed on pause and the world of Gilead has not been immune to that. Although, the show was renewed in 2019 and we have received yearly instalments since 2017, the pandemic has pushed the fourth season to 2021. One predominant storyline in Season Three revolved around June’s mission to liberate the children of Gilead to Canada. On 24th June Hulu released the Season 4 trailer, which opens on an injured June (Offred) being carried away by other Handmaids. Elizabeth Moss’s voiceover (who portrays June), states ‘I can’t rest, my daughter deserves better, we all deserve better.’ The trailer fans out into an explosive montage of clips, depicting June, the Handmaids and other members of the resistance in the next stage of rebellion against Gilead.

Like Season 1, but unlike the second and third installments, Season 4 will only contain ten episodes. Speaking to IndieWire, showrunner Bruce Miller said: “Some storylines just seem to shake out as a 10-episode story, in my eyes.” IndieWire later adding ‘According to Miller, a 10-episode season allows the show the luxury to spend several episodes exploring a small piece of the story because the need for multiple story arcs throughout the season has been eliminated.’

Miller also said that Canada (separate from Gilead and not in line with its practices), will play a larger role in the coming season. Stating to TV Guide “The people in Toronto are as much a part of the story as the people in Gilead, All the people in Toronto are showing us what June has waiting for her if she does ever get out. You’re kind of telling those stories of possible routes for June, but it’s not all going to be sunshine and lollipops.”

Season 1 of The Handmaids Tale followed, rather accurately, the events in Margaret Atwood’s original novel, taking June’s storyline, (aka. Offred named after her owner ‘Of Fred) right up to her place at the end of the novel. The following seasons, expanded the world of Gilead and June’s story further, with Margaret Atwood serving as a producer on the show.

Although, set in a fictional world, the beauty of dystopia and Margaret Atwood’s dystopia at that, is that it takes concepts and inspiration from the history and by parallel shines a light on the current world that we are living in. Atwood said to The Guardian ‘“When it first came out it was viewed as being far-fetched. However, when I wrote it I was making sure I wasn’t putting anything into it that humans had not already done somewhere at some time.” Fertility in women and a woman’s role in the world has long been dictated in biblical tales. The persecution of women in Gilead alludes strongly to the Salem witch trials, and stealing children from their mothers can be seen throughout history, until the rise of women’s rights, a mother typically had no rights to her children. Further, in a horrific example, Stylist outlined: ‘In Australia as recently as the Seventies, indigenous children were lawfully stolen from their homes and placed in religious institutions or fostered out to white families.’

The show does not shy away from these issues, shining a light on current injustices facing women throughout the world today. From genital mutilation, LGBTQ rights, female censorship, mother shaming, breast-feeding, immigration, victim shaming and so forth. Many have seen stark comparisons with the Handmaid’s Tale narrative and Trumps presidency, protesters even donning the red capes of the Handmaids. The Guardian wrote: ‘“You are seeing a bubbling up of it now,” [Atwood] said, referring in particular to moves under President Donald Trump to restrict the right to abortion. Trump said last year women should face punishment if they receive abortions, a comment he later retracted.”

Sure to be in line with the times, Season 4 is set to be another phenomenal installment of The Handmaids Tale series.