Blog - Latest News
You are here: Home / Around The Web / Technology / The UK’s Rollout of the Contact Tracing App 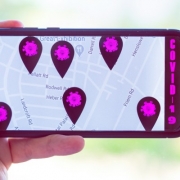 Contact tracing is a standard procedure in limiting the spread of most contagious diseases, in the early days of the coronavirus outbreak, it proved useful. However, as the pandemic slowly overwhelmed many health services, contact tracing became difficult to maintain for many countries. Contact tracing involves working with an infected person to find out who they have come in contact with during the period where they were infectious, those people are contacted and warned, often asked to go into isolation, and given help, advice and care as they monitor themselves for symptoms. If a person sadly does fall ill, health care professionals are already aware of the situation and are able to quickly offer effective care. The patient should have also isolated and protected others from potentially catching the illness whilst they were asymptomatic, thus limiting the spread of the virus.

For many countries COVID-19 has abated slightly and healthcare services are regaining a steady control. The UK’s Prime Minister, Boris Johnson, announced towards the end of March that England was past the peak. Although, like many other areas, this does not mean lockdown has lifted nor are restrictions over. In order to preserve safety and keep the virus infection rate manageably low, governments will need to ease measures carefully and intelligently. One of the ways to continue to monitor and restrict the viral spread and allow economies to slowly gear back up, would be to reintroduce contact tracing.

As the COVID-19 pandemic rapidly evolved, manual contact tracing became difficult to maintain due to the sheer volume and speed at which the infection was spreading. Manual contact tracing would take manpower from hospitals that were already suffering to meet high demand. In the last few months, technology companies have been working on smartphone apps that would make the contact tracing procedure practically instantaneous.

Several technology companies around the world have released or are refining different contact tracing apps and generally, these work very similarly, by monitoring a person’s contact with others via Bluetooth signals and sending out alerts if the person falls ill. Countries such as Norway, France, Australia, Singapore, Britain and more have all been developing contact tracing technology. However, there has been some disparity between differing approaches. In particular, there is a divide between centralized and decentralized models. This can be exemplified in the UK’s contact tracing app, developed from NHSX – the technology arm of the National Health Service, and the contact tracing app developed by Apple and Google.

Like many of the other apps around the world, both NHSX and Apple models use Bluetooth signals to log other smartphone users in close proximity. Then anonymous alerts can be sent to these phones if one person becomes infected. One difference between Apple and Google’s app and the UK’s NHS app is that the former is decentralized and the latter centralized. Meaning, that most of the process is the same, but users of the decentralized model will have more control over their information. In the centralized version, the phone and app will send its anonymised ID and the codes of phones it has come into contact with to a centralized database. Arguably, this gives health authorities a better overview of the spread and the performance of the app. In the decentralized model, the phone will only send its own anonymised ID to a centralized database and will send alerts privately.

Another problem that has arisen however, is that the UK’s NHS app cannot interact with the decentralized app being developed by Apple and Google. Further, Apple phones have proved incompatible with other contact tracing apps making their effectiveness somewhat lessened. Singapore developed a centralized contact tracing app called ‘TraceTogether’ and it was widely regarded as leading in the field. However, according to the BBC ‘the app was only being used by about 20% of the local population, and there had been a resurgence of Covid-19 cases.’ One of the problems in this case was the restrictions Apple has put on the use of Bluetooth, so IOS users in particular were struggling to effectively utilize the technology. Currently this is being reviewed by TraceTogether and Apple. Australia launched its own CovidSafe app, which had similar problems with Apple compatibility and this has actually proven the case with many contact tracing apps across the world, many of whom are in discussion with Apple to improve quality.

There has also been major contention around the subject of privacy. As these apps will gather Bluetooth and GPS data in the background, many fear the abuse and potential vulnerability that comes from exposing their data. Civil bodies are urging that these apps be properly monitored. In the UK, a parliamentary committee has said that the NHS app not be rolled out ‘until the government has increased privacy and data protections,’ according to The Guardian.

Soccer To Return To Europe

How Two of The Biggest Economies in The World Are Losing The Battle With Co...
Scroll to top