Blog - Latest News
You are here: Home1 / Around The Web2 / Science3 / These Parrots are the First Birds Observed Showing Kindness to Others 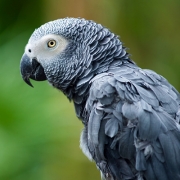 Helping others is such an essential part of being human that we’ve developed elaborate rituals—and biblical edicts—for protecting kin and sheltering strangers. Yet aside from humans, only a few other species, including orangutans and bonobos, seem to willingly help others. Now, scientists say they’ve found the first nonmammals that are also altruists: African gray parrots.

Past studies suggest some birds are prickly creatures. For example, crows—known for their intelligence—would not help other crows earn a nut reward, as parrots do for each other in the new study. The parrot study is “striking,” says Karl Berg, an avian ecologist and wild parrot expert at the University of Texas, Rio Grande Valley, despite the small numbers of birds in the study. Berg was not involved in the research.

To find out whether African gray parrots or blue-headed macaws—two exceptionally brainy species—would assist their fellows, animal cognition scientists with the Max Planck Institute for Ornithology’s Comparative Cognition research station, tested four and three pairs, respectively. They first taught the captive birds to exchange a token with a researcher for a nut reward.

In both species, the bird lacking the tokens often uttered soft cries to get their partner’s attention. But the blue-headed macaws hopped away, ignoring the cries for help. In contrast, the African grays seemed to know that help was needed even without a reward: Seven out of eight gave their partners their tokens in the very first trial, the scientists report today in Current Biology. When the roles were reversed, the new donors generously passed their tokens to their former helpers, suggesting the grays have some understanding of reciprocity.