Blog - Latest News
You are here: Home / News / Culture News / Thousands of Celebrations of Juneteenth Across The US 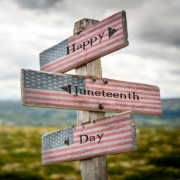 On Friday 19th June thousands of Americans hosted celebrations for Juneteenth, a holiday to mark the day of abolition of slavery in America. Across the US, Juneteenth was celebrated by carrying out anti-racism marches, calm rallies, bike rides and music parties to celebrate the black community. Juneteenth is considered a true Independence Day, also considered a black Independence Day and Emancipation Day.

The recent tragedy of the death of George Floyd acted as a shadow behind the celebrations of Juneteenth. George Floyd was a black man in Minneapolis who was killed by a police officer kneeling on his neck.

In many locations around the US, celebrations were hosted in memory of this day of freedom. In Minneapolis, Minnesota, the home of George Floyd, an event was organised in which a five-mile route was planned for runners, walkers and cyclists in memory of Floyd. For the afternoon, a reparation rally was planned in the state capital. It was at this event the organisers commanded for the murder of George Floyd to be accepted as a racial and economic issue.

In the state of Atlanta, protesters joined together in solidarity in front of the Georgia Bar association. Their aim was to ensure citizens recognised that there must be justice for other coloured men such as Ahmaud Arbery who was killed whilst out for a run. He was shot dead by a white man whilst another white man filmed the killing. Moreover, college and university students of Atlanta managed a march which ended with a voter registration drive and concert.

In Oklahoma, speeches were made by many including veteran civil rights activist Rev Al Sharpton, a man who spoke at Floyd’s funeral service. The speech was shadowed by history of an unacceptable action in 1921 in Tulsa in Oklahoma where a racist white mob destroyed the Black Wall Street community. President of the US, Donald Trump was due to complete an election campaign event on June 19th, however once educated about the significance of the event he decided to delay.

The city of New York flourished with its celebrations for Juneteenth. The mayor of New York City, Bill de Blasio, announced that from next year Juneteenth would be an official city and school holiday. In the borough of Harlem, hundreds of people wore face masks to celebrate American black identity with fun, dance and African music. On West Harlem pier, citizens gathered together to demand justice for Breonna Taylor, another victim of systemic racism in the US as a woman of colour. Breonna Taylor, a 26-year-old who was killed by the police in March, when the police entered her home in Louisville, Kentucky with no warning.

In Oakland California, individuals of influence used their voice to create more impact. The activist and scholar Angela Davis appeared at a march where many gathered shutting down the city’s industrial port. As the Guardian reports Davis expressed “If I had not chosen to become a university professor my next choice would have been to be a dock worker,” she continues “In order to be part of the most radical union in the country. She continued to support the people of the march by saying “Thank you for shutting down the ports today, on Juneteenth. You represent the potential and power of the labor movement”. Many workers supported the march that was led on a route from the Port of Oakland to Oscar Grant Plaza. The march was in memory of a black man who was killed by the police in 2009.

In the state of Texas, many gathered on the lawn of Galveston’s historic Ashton Villa which served as a residence of the Confederate army during the civil war. It is this same building in which Mj Gen Gordon Grange of the Union army delivered the news that all slaves would be free from 19thJune 1865. The event was held in honor of Al Edwards, a man who spent most of his life pouring his heart into getting legislation passed to make Juneteenth a paid federal holiday.

In light of the saddening tragedy of the death of George Floyd and the fearless Black Lives Matter protests, many Americans are determined to tackle systemic racism in their society. An issue that affects coloured people ability to source education, housing, health needs and economic inequity. Businesses such as Target and Twitter allowed their employees to have the day off for Juneteenth, showing their respect for the celebration. Target and Twitter would like to emphasise with their employees that they stand with them in the idea that Juneteenth should be an official holiday day. Some politicians are using their influence to drive the official holiday forward such as Kamala Harris and Cory Booker from the Senate Democrats have introduced legislation to make Juneteenth a national holiday. Even though, opposition is excepted from republicans many democrats will defend the importance of this day.