Blog - Latest News
You are here: Home1 / Around The Web2 / Sports3 / Tiger Woods’ Comeback At Masters Named Sports Story of the Year 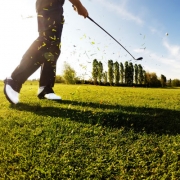 A green jacket. A heart-melting embrace. A stirring return to the top of golf by one of the sport’s all-time greats.

In choosing Tiger Woods’ victory at the Masters as The Associated Press sports story of the year, voters went with the uplifting escape of a great comeback over options that were as much about sports as the issues that enveloped them in 2019: politics, money and the growing push for equal pay and equal rights for women.

The balloters, a mix of AP member sports editors and AP beat writers, elevated Woods’ rousing victory at Augusta National over the runner-up entry: the U.S. women’s soccer team’s victory at the World Cup. That monthlong competition was punctuated by star Megan Rapinoe’s push for pay equality for the women’s team and an ongoing war of words with President Donald Trump.

Rapinoe’s efforts to use sports as a platform to discuss bigger issues was hardly a one-off in 2019. Of the top 12 stories in the balloting, only three — titles won by the Toronto Raptors, Washington Nationals and University of Virginia basketball team — stuck mainly to what happened between the lines.

All the rest — including the blown call that cost the Saints a chance at the Super Bowl, a California law that threatens to upend the NCAA and Simone Biles’ dominance at gymnastics’ world championships, set against the backdrop of the sex-abuse crisis consuming the sport in the U.S. — were long-running sagas that went beyond a single day or event. They painted sports not as an escape from the world’s problems but merely another window into them.

It’s no stretch to say that the whole of the Woods saga — namely, the sordid, pain-riddled, decadelong prelude to his victory at Augusta National in April — would fit into that category, as well.

His downfall began in the wee hours the day after Thanksgiving in 2009, when he ran over a fire hydrant outside his house in Florida, triggering an avalanche of stories about infidelity that would lead to the breakup of his marriage and play into the near-destruction of his career.

Part 2 was the injuries. Woods came close but did not return to his dominant form after his return to golf following his breakup with his wife. And as time went on, his physical condition deteriorated. He didn’t play in 2016 or 2017, and at the end of ‘17, he conceded his back was so bad that his days of competitive golf might be behind him.

There were four risky back surgeries. Woods also required a good deal of inner healing after a mortifying DUI arrest in 2017 that exposed his reliance on painkillers.

Through it all, Woods somehow kept nurturing his love for golf. And eventually, he found his game again. He climbed his way back to the top. He had close calls at two majors in 2018 — the British Open and PGA Championship — and then won the season-ending Tour Championship, as good a sign as any that, at 43, he could take on the best and win.

But regular tournaments are not the majors, and no major is the Masters.

It was on those hallowed grounds at Augusta National where Woods set the marker, starting a decade of dominance that would redefine the game. He blew away the field by 12 strokes in 1997 to win the first of what has become five green jackets and 15 major titles.

On that day, Woods came off the 18th green and wrapped himself in a warm embrace with his father, Earl, whose death in 2006 left an undeniable void in the player’s life.

Though there had been a handful of close calls between his U.S. Open victory in 2008 and the start of 2019, it was clear that if there was a single course where Woods could conjure the old magic and end a major drought, it would be Augusta National. As a four-time champion, Woods built a career on studying every inch of the layout, knowing every fault line and every sneaky twist and turn of the slickest greens on earth.

But where, at one time, he might have overpowered the course and intimidated the competition, in 2019, he simply outlasted them both. He avoided mistakes while everyone else was making them. Instead of taking a lead into the last day, then never giving anyone a whiff of hope, this was a comeback. He started the day two shots behind.

As AP Golf Writer Doug Ferguson wrote in his wrapup of the final day: “Woods never missed a shot that mattered over the final seven holes, taking the lead with a 5-iron to the fat of the green on the par-5 15th for a two-putt birdie, delivering the knockout with an 8-iron that rode down the ridge by the cup and settled 2 feet away for birdie on the par-3 16th.”

When it was over, Woods came to the same spot where he’d met Earl 22 years before. He scooped up his son, Charlie, and held him in a long embrace, then did the same with his 11-year-old daughter, Sam, and mother, Tilda.

The Different Ways To Close Real Estate Purchase Or Refinance