Blog - Latest News
You are here: Home1 / Around The Web2 / World3 / Tokyo, Beijing, Singapore Are The World’s Greenest Commuter Citi... 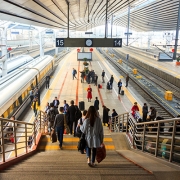 Three of Asia’s biggest business hubs have emerged as the world’s most environmentally-friendly commuter cities.

Tokyo, Beijing and Singapore topped the charts for green commuting in a new study by data insights company, Kantar.

Those cities ranked especially highly due to commuters’ general tendency to use public transport or walk to work in the three densely populated metropolises.

The study questioned 20,000 people in 31 cities globally about their commuting habits.

Seoul, which placed seventh, was the fourth Asian city to make the top 10. It was joined by four European cities — London, Copenhagen, Amsterdam and Moscow — which are renowned as cycle cities with expansive public rail networks. Nairobi and Sao Paulo rounded out the list.

No U.S. city made it to the top ranks. A separate 2017 study found that the average American spends a total of 52 minutes per day commuting, with the vast majority — about 85% — using a private car or car pool. Just over 5% used public transport, while 2.8% walked or 0.6% cycled.

Kantar’s findings speak to the recent infrastructure developments of some of Asia’s big cities, which make public transport a viable — and often preferable — means of transportation for commuters who would rather avoid driving the congested roads.

But they also highlight the work that remains to be done in cities traditionally designed for cars if progress is to be made in reducing air pollution and improving the environment.

“One of the biggest challenges facing global cities today is moving commuters away from the convenience and comfort of their cars and onto more sustainable transport options,” Guillaume Saint, global automotive & mobility lead at Kantar told Reuters in a statement.

According to the United Nations, air pollution causes 7 million premature deaths per year. Meanwhile, at 29% of all global emissions, transportation is seen as one of the biggest contributors to global greenhouse gases.