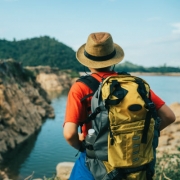 With coronavirus still very much a threat across the world, many countries have quarantine rules that must be adhered to, or face a fine.

Canada is one of these countries. Kentucky man John Pennington left Alaska and headed to Canada, visiting the Rimrock Hotel in Banff along the way. Staff there contacted local police as they believed he could have broken quarantine rules – currently Americans are not allowed to travel to Canada for ‘discretionary’ reasons due to the covid-19 restrictions. However they are allowed to drive through the county if they are traveling between Alaska and mainland U.S. states for essential reasons – these could be heading to a primary residence or to a place of employment, but even then they must stay away from any tourist activities, leisure sites and national parks and have to take a direct route.

If you must travel through Canada you are required to remain in your vehicle as much as you can and stay away from other people. If you require food the use of drive-thrus is encouraged.

Mr. Pennington was first fined C$1,200 ($919) on June 25 after staff at the Rimrock believed he had broken the rules. Hotel stays are allowed in Canada but any guests traveling from America must remain in their rooms for the duration of their stay. Mr. Pennington was fined by police who told him to remain in his room until he was due to leave, however the next day he chose to visit Sulphur Mountain, a local tourist attraction, and now faces a fine of up to C$750,000 ($574,468) or go to jail for six months.

A local had reported Mr. Pennington to police after seeing his car, complete with Ohio licence plates, at the attraction. Banff Royal Canadian Mounted Police Staff Sgt. Michael Buxton-Carr explained, “Investigators determined Mr Pennington had not left town as required on the morning of June 26 but had chosen to visit a popular tourist site. There are amenities available for essential needs, food and lodging, at the hotel. There was no legitimate reason to go up to Sulphur Mountain.”

Canadian government rules state that “failure to comply with the current border restrictions is an offence under the Quarantine Act and could lead to up to C$750,000 in fines, and/or imprisonment of up to six months.” Mr. Pennington is due to appear in court in November after being charged with breaching the federal Quarantine Act. Tourists have generally been accommodating with the new quarantine rules however staff at Fort Gibraltar, Winnipeg where shocked when a couple of out-of-province tourists got angry after being turned away, stating that if asked again if they had self-quarantined they would lie.

Nicolas Audette, marketing and communications manager for Festival du Voyageur, which was holding an event at the site, commented, “the initial reaction was surprise: surprise that anyone would disregard people’s health that easily and surprise that people wouldn’t take these rules strictly. It’s disappointing to see that people would disregard the current provincial guidelines”.
The tourists had been hoping to visit the Terry Fox Day long weekend and were asked standard screening questions on their arrival. During these questions it emerged that the couple had only arrived in Manitoba from Quebec a day earlier. Any visitors to the area from anywhere east of Terrace Bay, Ont. must comply with a 14-day self-isolation requirement once they have entered Manitoba.

The new policy at Fort Gibraltar is to question visitors whether they have shown any symptoms of Covid-19, or have been in the vicinity of anyone with Covid-19. They are also required to declare if they have recently traveled before they are allowed to enter the attraction.

When hearing that the visitors had only just arrived in the area they were told by an employee “unfortunately, we won’t be able to let you visit the fort today”. It was then that the couple got “quite vocally upset”. Audette continued, “What they said was, they’re very upset and they’re going to go somewhere else. And if ever they’re asked again if they’ve done the 14-[day] quarantine, they’re probably just going to lie and say they have, so they don’t have to encounter this problem again.”

The attraction, which has recently installed a ‘pay what you can’ system has been supportive of any restrictions that are needed to be put in place and have increased their cleaning and sanitation, introduced visitor screenings and provided more self-guided information.

Audette confirmed that on the whole, visitors have supported the measures saying, “This was definitely an unusual interaction. In general, people are very welcoming of these new measures and are thankful that we have these measures in place. “They feel much safer once they’re at the fort because these measures are in place”. Audette believes that to “get out of this pandemic, we all have to work together. It’s up to everyone – not just us, but also tourists – to ensure that they’re doing everything they can to respect provincial guidelines and to do everything they can so we can get out of this pandemic together.”

Athletes Protest After Shooting of Jacob Blake
Scroll to top