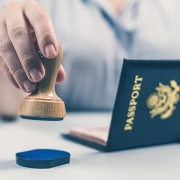 There have been many questions raised by President Trump’s latest travel ban, which has been imposed on four more African countries.

Many visas for citizens of Nigeria and Eritrea have seen heavy restrictions applied to them while those from Sudan and Tanzania could see an end to ‘diversity’ migration visas.

Acting homeland security secretary Chad Wolf confirmed that the countries did not reach US security and information sharing standards and that Myanmar and Kyrgyzstan had also been listed.

As part of his 2020 re-election campaign Trump has been heavily focused on reducing immigration, a policy that is proving popular with Republican supporters. However experts across the world have expressed concerns that the crackdown could negatively affect America’s attempts to stop the amount of influence China and Russia has on Africa, with many also believing Trump’s domestic political agenda is having an unnecessary impact on foreign policy.

The ban comes only three years after the majority of travelers and immigrants from Somalia, Chad and Libya were banned from the country, a move that attracted high amounts of criticism, with the policy being revised in court before finally being maintained by the US Supreme Court in June 2018.

Although only small in terms of economy, Eritrea is located by the Red Sea and Russian authorities have expressed an interest in creating a military logistics base in the country, close to the US base in Djibouti.

Those in the targeted countries have also criticized the ban with Eritrea’s foreign minister Osman Saleh Mohammed expressing concern that the ban would hinder their relationship with America stating that they “find this move unacceptable.” While the official statement from Eritrea’s capital Asmara confirms they believe the ban is an “unfriendly act”.

There have also been calls that by imposing the ban on travelers from Nigeria, America is sending a ‘patronizing message’ to the 206 million people who live in Africa’s biggest economy.

In 2018 America received 7,900 immigrants from Nigeria – more than any other African nation – with the majority of the visas being received by family members of US citizens.

Nigeria’s foreign affairs minister Geoffrey Onyeama admitted he was “disappointed” by the decision. Meanwhile President Muhammadu Buhari has already appointed a minister to determine what issues has led America to make such a move considering Nigeria has always been a key ally of the US in Africa, supporting the American administration at international forums.

Opposition leader Atiku Abubakar also confirmed he was disappointed by the decision, with his post on Twitter stating:

“The ban does not take into account the pro-American sentiments of the Nigerian public … and the solidarity previous Nigerian administrations have had with the United States.”

Many commentators have expressed their surprise at the move, comparing it against the 2018 US policy for Africa which made trade and the fight against Islamic militants the main priority. John Bolton was Trump’s national security adviser when the policy was announced and had accused “great power competitors, namely China and Russia” of “predatory practices”.

However in the last few years Russia has attempted to increase their influence in Nigeria by offering to assist Abuja’s fragile military in their battle against the growing Islamic extremist groups in Nigeria’s north-east.

And with Nigeria becoming one of the fastest growing markets for Chinese exports – alongside new railways and airports being built using massive loans by Chinese banks to Beijing’s state-owned companies moving into the area – it is a concern that the country is falling deeper under their influence.

However it is not just the political aspects that have caused concern, as there could also be a negative affect on individuals.

Awet – not his real name for fear of reprisals – is an Eritrean refugee who is now living in America as a legal citizen and he believes the new law is “very hurtful”.

Resettled in America during 2009, Awet was able to bring his children to live with him thanks to a 2018 peace deal between Eritrea and Ethiopia that allowed them to leave Eritrea safely on family visas.

He believes that the US should still allow the children into America, as they would “want to come to be with their mother or father”.

Africa already had mixed views on President Trump with many areas of the continent unhappy with his foreign policies. However he is still popular in some areas, including Nigeria. Yet the African nations have recently seen anger at him after it was reported in 2018 that he had described them, El Salvador and Haiti as ‘shitholes’, querying why America was allowing so many of their citizens into the country.

The ban has also caused problems for Nigeria’s growing technology industry. Over the last ten years Nigeria’s tech ecosystem has increasingly become stronger, with Facebook and Google both looking at ways they can increase their foothold in the country. However the fallout of the travel bans could reverberate throughout the sector with repercussions being felt across the world.