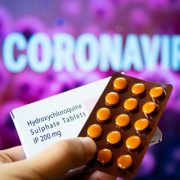 President Donald Trump has once again promoted using hydroxychloroquine in the fight against Covid-19. Speaking at his latest coronavirus press conference, the president contradicted the advice given from his health officials to defend the use of the malaria drug.

Numerous studies conducted since the outbreak of the coronavirus pandemic have failed to show hydroxychloroquine’s efficacy in treating Covid-19. Experts and regulators also warn that the drug, normally used to treat malaria, rheumatoid arthritis and lupus, can also cause serious heart issues.

President Trump, however, claimed that the drug was only rejected for use as Covid-19 treatment because he had previously promoted it.

“We know that every single good study – and by good study I mean randomized control study in which the data are firm and believable – has shown that hydroxychloroquine is not effective in the treatment of Covid-19,” the director of the National Institute of Allergy and Infectious Diseases Dr Anthony Fauci told the BBC this week.

It was just a matter of weeks ago that the US Food and Drug Administration (FDA) issued an official warning against the use of hydroxychloroquine after reports surfaced of “serious heart rhythm problems” and other health issues that the drug could cause.

Additionally, the FDA revoked its emergency-use authorization for the drug to treat Covid-19. The World Health Organization (WHO) has collated multiple studies into its effectiveness and say “there is currently no proof” to suggest that it should be used as a treatment for or to prevent Covid-19.

“I can only say that from my standpoint, and based on a lot of reading and a lot of knowledge about it, I think it could have a very positive impact in the early stages,” President Trump told reporters during his press conference.

“I don’t think you lose anything by doing it, other than politically it doesn’t seem too popular.”

“When I recommend something, they like to say ‘don’t use it’,” the President added.

Trump first championed hydroxychloroquine as an effective drug against Covid-19 in March when he surprised many by announcing that he was taking the drug, along with the antibiotic azithromycin in hopes of reducing the risk of catching the virus.

The WHO, the US National Institutes of Health (NIH) and other researchers and regulatory bodies across the world have mandated a number of studies into how hydroxychloroquine could be used against coronavirus. No study found that the drug, used with or without azithromycin, helps treat the illness.

“90% of all prescriptions written in the United States are for generic drugs. We have approved more generic drugs than any other administration by far. Generic drugs can be just as good as the brand names, but cost much less,” President Trump added during the press conference.

“Yet less than 10% of the active pharmaceutical ingredients needed to make these drugs are currently manufactured in America. More than 50%, however, are made in India and China.

“You’ll be seeing a lot of things that have happened. It’s been happening, but it’s happening at a more rapid pace right now. With this new agreement, my administration is using the Defense Production Act to provide a $765 million loan to support the launch of Kodak Pharmaceuticals. It’s a great name when you think of it, such a great name.

“Was one of the great brands in the world. Then people went digital, and Kodak didn’t follow. But now under very extraordinary leadership, they are following, and they’re doing something that’s a different field. It’s a field that they’ve really hired some of the best people in the world to be taking care of that company and watching that company, watching over it,” Trump continued.

Both President Trump and his son Donald Trump Jr faced criticism this week as the pair shared a video on Twitter of a group of doctors advocating hydroxychloroquine as a viable treatment for Covid-19.
Facebook and Twitter both chose to remove the content from their sites, citing misinformation, while Twitter suspended Trump Jr from tweeting for 12 hours as punishment for sharing the clip to his followers.

The Daily Beast reported that one of the doctors shown in the video, Dr. Immanuel, has a reputation for making outlandish claims, previously saying that the government is run by “reptilians” and that scientists are developing a vaccine to stop people being religious.

“Then now you heard it’s the 33rd use. We don’t talk about it all the time. We used it, and we used it as a little bit of a threat, frankly, with certain companies that weren’t doing as we were asking them to do. It came through as both a threat and a usage, but this is our 33rd use of the Defense Production Act.”

Could You Benefit From Adopting The 10 Minute Habit?
Scroll to top