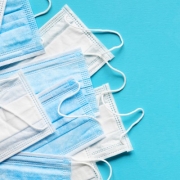 President Trump, who throughout the pandemic has been against the use of face masks in public, has now come out to say that he is ‘all for masks’, even claiming that wearing one makes him look like the Lone Ranger.

Despite this apparent U-turn from the President, the 74-year-old, up for re-election this year, maintains that there is no need to make the use of masks in public mandatory. Trump also predicted yet again that the pandemic would ‘disappear’ soon, even though the country this week set a record again for new cases in a day with 52,000.

As of July 1, John Hopkins University, who have been tracking the disease in the United States, revealed that the country was fast approaching 2.7 million confirmed Covid-19 cases and already had more than 128,000 deaths.

“I would. Oh, I have. I mean, people have seen me wearing one,” Trump told Fox Business’ Blake Burman when asked if he would wear a mask. “If I’m in a group of people where we’re not, you know, 10 feet away, and… but, usually, I’m not in that position. And everyone’s tested. Because I’m the president, they get tested before they see me.”

“I don’t know if you need mandatory, because you have many places in the country where people stay very long distance. You talk about social distancing. But I’m all for masks,” Trump said to Burman.

“I mean, I would have no problem. Actually, I had a mask on. I sort of liked the way I looked, OK? I thought it was OK,” Trump said Wednesday. “It was a dark, black mask, and I thought it looked OK. Looked like the Lone Ranger. But, no, I have no problem with that. I think… and if people feel good about it, they should do it.”

House Speaker Nancy Pelosi said last week during a conference that a national mask mandate is “long overdue”, while Democratic presidential candidate Joe Biden said last week that he “would insist that everybody in public be wearing that mask.”

The US Centers for Disease Control began recommending people wear masks or face coverings in public in April in order to help slow down the spread of the virus, but Trump told reporters then that he would not be wearing one. The President has also claimed previously that some people only wear masks as a political statement against him.

“I don’t think I’m going to be doing it,” Trump told reporters during a press conference in April. “Wearing a face mask as I greet presidents, prime ministers, dictators, kings, queens – I just don’t see it.”

During a visit to a Michigan factory in May, Trump told reporters that he had removed his mask before facing cameras because he ‘didn’t want to give the press the pleasure of seeing it.’

Last week, an ABC News/Ipsos poll found that almost 90% of Americans said that they wore either a mask or face covering when outside of their home, which is a 20-point jump from mid-April.
Now, Trump has turned his attention elsewhere and this week announced plans to sign an executive order that he says will help to reform the federal workforce.

“To further expand opportunity I’m taking a bold action to reform the federal workforce today. I’ll sign an executive order that directs the federal government to replace outdated and really outdated… It’s called degree-based hiring with skill-based hiring so we want it based on skill,” Trump told the American Workforce Policy Advisory Board this week.

“The federal government will no longer be narrowly focused on where you went to school but the skills and the talents that you bring to the job. We want that skill to be there, we want it based on merit, we’ve looked at merit for a long time and we’ve been able to get that done and today’s signing is a very, very important one.

“We’re making a lot of progress with the whole situation that came in from a place called China as you probably know, you probably see, but we have a little work to do and we’ll get it done,” Trump continued.

“We’re having some very good numbers coming out in terms of the comeback, the comeback of our nation and I think it’s going very rapidly and it’s going to be very good but right now we’re in that process of building and it’s an honor that you’re with us today, we very much appreciate it.

“Together we built the greatest economy in history and literally in the history of the world, the greatest we’ve ever had, the greatest the world has ever seen and now we have to bring it back because we had a close in order to save millions of lives. We added 2.5 million jobs last month, which was incredible. A number – the largest monthly increase in history and more than double the previous record. So we’re bringing it back. We had the greatest ever and we had to close it and now we bring it back. And we start off with 2.5 million jobs in one month. I would say that’s pretty good.”

Fears As Dog Ownership Rises During Lockdown, But Is It Really A Bad Thing?
Scroll to top