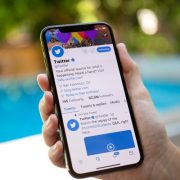 Social media platforms have been in the limelight in recent months, as the public highlight Facebook and Twitter inability to handle hate and offensive content. After Wiley tweeted Anti-Semitic posts, Twitter users ranging from influential actors, activists and creatives staged a 48-hour virtual walkout in protest of the way Twitter has handled the incident.

Established British Rapper Wiley has recently posted on Twitter and Instagram expressing his Anti-Semitic views. The social media platforms both acted as quickly as they could, removing a portion of the content however UK government officials have commented saying this was not quick enough. Influential figures blamed the social media platforms for the time taken as well as for not having an increasingly stricter system when it comes to Anti-Semitic content.

Wiley has an outstanding reputation in the music industry and has thousands of fans follow him, therefore the artist’s actions could be deemed unexplainable. In 2018, Wiley was credited for his work in the industry, gaining an Order of the British Empire award by Prince William for his contribution to music. This action has resulted in the global artist being blocked from using social media platforms, Facebook, Twitter and Instagram, one of the main communication methods he uses to connect with his followers.

Twitter spokesperson said in a statement regarding the situation “Abuse and harassment has no place on Twitter and we strongly condemn it,” they continued “Our Hateful Conduct Policy prohibits the promotion of violence against — or threats of attack towards — people on the basis of certain categories such as religious affiliation, race and ethnic origin, and it is also against the Twitter rules to use hateful imagery”. Twitter spokesperson added “We enforce our rules judiciously and impartially for all and take action if an account violates our rules”. Twitter have expressed that they believe the platform did take action once aware of the content, blocking certain tweets and locking Wiley out of his account.

UK government officials and the general public are not satisfied with the way Twitter has handled the hateful comments. Home Secretary Priti Patel has accused the platforms for not acting quickly enough when removing the hate speech. She tweeted on Sunday 26th July “The Anti-Semitic posts from Wiley are abhorrent” she continued “They should not have been able to remain on Twitter and Instagram for so long and I have asked them for a full explanation. Social media companies must act much faster to remove such appalling hatred from their platforms”.

The political campaign group Labour Against Antisemitism decided to hold a 48-hour walkout that was held from 27th July 2020 at 9am. The group tweeted “This is in protest at Twitter’s repeated failure to tackle antisemitism on the platform #NoSafeSpaceForJewHate”.

The digitization of the protest made it extremely hard to estimate the number of people that would take part however the hashtag #NoSafeSpaceForJewHate and #48HoursSilence has received a fantastic response to date. On Monday 27th July Twitter reported that it has almost 50,000 posts associated with it.

The Jewish Leadership Council has opted to get involved in the protest expressing that the Wiley incident is not the first issue the council have witnessed. The Independent reports the Jewish Leadership Council tweet “For years we have witnessed Jews and others being victimized on social media with little or no interference from the social media companies”.

Influential organisations such as the Royal Opera House and the Royal Academy tweeted in support “We are joining the #48HoursSilence boycott of @Twitter to protest their inaction on antisemitism. We stand in solidarity with Jewish friends and colleagues against intimidation and discrimination. #NoSafeSpaceForJewHate”.

To add to this, the outstanding actor Jason Isaacs who played the famous Harry Potter character tweeted “I’m in. Or out, rather. I’m so used to antisemitic hatred, caricature and conspiracy theories from governments, looneytunes, the left, right and reasonable middle that I long ago lost hope for change online or in life. Maybe there’s a window”. His tweet suggested to users the frustration he has felt whilst witnessing other Anti-Semitic content. Jason Isaacs among other members of the public hope for a glimpse of a change in attitude.

The UK government has attempted to put in place stricter measures by instructing that media regulator Ofcom enforce a firmer regulating system for social media platforms to protest users from hateful content Ofcom have commented that it will result in “fair, proportionate and transparent” sanctions for the platforms.

Hawaii Reinstates Travel Quarantines And Other Restrictions As New Covid-19...
Scroll to top